Angular Vs React: A Detailed Comparison 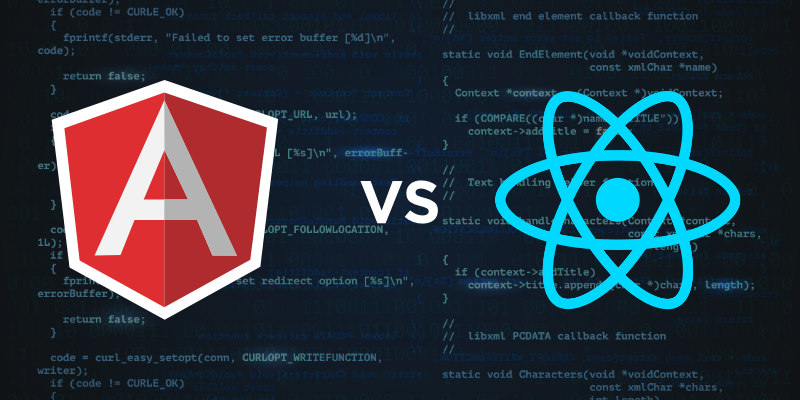 One of the most preferred languages among developers is JavaScript. A lot of people, amateurs, and professionals tend to structure their projects or applications using JavaScript. But there remains a lot of controversy as to which is the perfect framework for their project. Selecting the right framework for a new JavaScript application, system or website is of utmost importance for any enterprise. The choice of the framework will affect the project’s permanence, code maintainability, ability to fit within deadlines, and the elasticity of your future app. Let’s See & Know more about Angular vs React

Angular vs React: Know in detail

ReactJs and angular are the most preferred frameworks but developers often have to make a tough choice between the two, for implementation in their project. Let’s see handling which of the two is easier and which provides more job opportunities in the marketplace.

What is React JS?

React is a JavaScript library that was created by Facebook that enables users to build UI elements. The framework simplifies the creation of user-friendly interactive interfaces. React javascript framework further makes the code simple to be comprehended and implemented. React js employs server-side rendering to enable developers to create an excellent, productive, and flexible solution.

Advantages  & Disadvantages of Angular vs React

An angular framework, one of the most preferred options for developers allows them to create out-of-the-box designs and solutions.

The framework has got a global community support system, which makes angular JavaScript the best JavaScript structure. Designers and developers constantly work and contribute to the community, which increases the reliability and credibility of the framework.

Two-way data bind is probably the top feature, as it diffuses the impact after every minor data change and does away with the need for further effort with data sync in view and model.

Typescript is one of the best supersets which helps to supply various checks that are object-based patterns and delivers high-performance characteristics.

When it comes to component-based architecture, they have connected binding. Each consists of elements with specific functionality. Moreover, they are not so tightly coupled and encapsulated. This kind of approach makes all the elements reusable and also increases their testability.

Complexity and steep learning curve are the two disadvantages of angular js. The main aim of programmers is generally to strengthen the security of apps to make them safe and reliable. With the introduction of the pre-rendering option in ng2 and angular universal, this issue has been resolved.

JSX, a prime component of react JavaScript allows the usage of HTML tag structure for sub-components rendering. It provides the ability to compound components and improves the building of machine-readable code in one compile-time verified file.

The prompt reading feature has given an edge to react js over angular JavaScript. React js consists of the latest methods to mitigate the rate of dom operations, accelerate and optimize the updates process. One of the prime components that are of great help when it comes to monitoring huge databases is virtual Dom.

While comparing Angular vs React, the core difference one needs to know between the two is that the former is HTML centric while the latter is js centric. JavaScript is way more robust, which is why to react JavaScript Framework is consistent, focused, and comprehensible.

When comparing angular vs react performance, it is pertinent to mention that react JavaScript is not an all-inclusive framework. Incorporating the UI library into a regular MVC structure, on the other hand, requires deeper programming. One can claim the react js structure to be still young and is yet to be mature and complete, considering its limited ecosystem and tutorial volumes.

Nowadays, flux is used to add architecture and a structure to the react app. Implementation of both angular and react js might become tough for anyone who is a non-experienced programmer as both lacks a comprehensive guide and structure.

Comparing Popularity and Users of These Two 2 Tools

Compared to Angular, React has more searches according to Google Trends. According to the Stack Overflow 2020 Developer Survey, React.js is the most popular and desired web framework among developers.

While people are more interested in Angular because of its many off-the-shelf solutions, both technologies are growing. Therefore, both frameworks are well-known in the market for front-end development.

React has received significant changes that make it easier for developers to provide feedback on new features, JavaScript syntax improvements, and experimental APIs.

Angular, on the other hand, has already seen a large uptick in use, which will continue with the release of Angular 10.

ReactJs and Angular are the most preferred frameworks but developers often have to make a tough choice between the two, for implementation in their project.

For its implementations, Angular uses real DOM. Real DOM is ideal for single-page websites that are maintained on a regular basis. Furthermore, the library is large, making the apps using Angular slower. Upwork is one of the most common Angular applications since the user experience does not need to be modified regularly.

React is ideally designed for pages that need frequent content updates because it uses a virtual DOM. The library is also small in size, making it more lightweight and dynamic. Instagram is an example of React, so the user feed must be updated frequently.

Angular is built with TypeScript. The main advantage of this strongly typed language is that it helps developers to keep their code clean and understandable.

Bugs are easier to spot and eliminate with the ability to see common errors as you type. This makes it quicker when it comes to debugging and also easier to maintain a large codebase – something which is particularly beneficial in large enterprise-scale projects. TypeScript is a superset of JavaScript, which means we can do more with our code, for example by using interfaces and enums. Arguably, it also has better autocompletion, navigation, and refactoring services.

React is built with JavaScript ES6+ and JSX script. JSX is a syntax extension that transforms JavaScript code into HTML-like syntax. This makes the code easier to understand, and typos are more easily identified.

When we discuss app structure comparison among Angular and React, AngularJS is a structural framework for developing dynamic web apps, whereas React is a javascript library that allows you to build UI components.

Angular’s structure is fixed and complex, making it best suited for experienced developers. Model, Controller, and View are the three layers that makeup Angular. The Controller creates an entity that is responsible for the Model and displays it with the View.

React Native framework allows developers to make their own decisions. For a React app, there is no such thing as “the only correct framework.” Only the View layer is provided by React, while the Model and Controller layers are introduced by the use of third-party libraries.

A major trend in front-end development for the last couple of years has been the boom of development tools that allow your component interactively and separately from the application. React allows you to manage the code according to your desired format. Of course, Angular comes with many ready-to-use elements.

The React community creates its UI tools, and there are many free and paid UI components on the React portal.

Why We Use both Angular and React

We use both Angular and React because both are great tools for app developers. Both frameworks have many advantages, but React works better than Angular so far. It’s being used more and more, it’s trendy and it’s growing.

ReactJS also has great support from the developer community. React outperforms Angular because it performs virtual DOM optimization and rendering.

It’s also easy to switch between versions of React. You don’t have to install updates one by one as in the case of Angular. Finally, React offers many solutions to developers to speed up their development and reduce bugs.

FAQ’s Of Angular vs React

Angular vs React: Which One to Choose for Your App?

When it comes to building single-page applications, both angular and react js are great options. Nevertheless, both of these frameworks are entirely different from each other.

Perception varies from person to person and some might think that react js is better than angular and vice versa. While choosing angular vs react js, you need to make your decisions based on your project’s requirements of usability and functionality.

None of the two is better or worse than the other. If you are looking to create a core skeleton for a dynamic front-end app, opting for angular will be a better choice. For improving specific parts of such web applications, implementing react js will be better.

React js can be merged with other Frameworks of JavaScript like a backbone for better results. So you can choose any as per our requirements, both are great options.

What is the difference between angular and react?

Key differences between angular and react are:

What are the benefits of using angular?

Benefits of using angular are:

When it comes to building single-page applications, both angular and react js are great options. Nevertheless, both of these frameworks are entirely different from each other. Perception varies from person to person and some might think that react js is better than angular and vice versa.

While choosing angular vs react js, you need to make your decisions based on your project’s requirements of usability and functionality.

None of the two is better or worse than the other. If you are looking to create a core skeleton for a dynamic front-end app, opting for angular will be a better choice. For improving specific parts of such web applications, implementing react js will be better.

React js can be merged with other Frameworks of JavaScript like a backbone for better results.

Are you looking for AngularJS development services to build your web app? Get in touch with the experts. With a team of developers, designers and analysts Echo Innovate IT is the leading web app development company. Our experts will guide you throughout the process of development and will assist you even after the completion of the development process.