App builders want to focus on cross-platform apps, hybrid apps. However, the market for android and iOS apps is expanding. Thus, mobile developers want app development tools that can optimize the process of developing apps.  It is important to know some of the best mobile app development frameworks.

Mobile frameworks allow the creation of performance and native-like features. However,  it sticks to a basic development approach in which you have to write once and run the application anywhere.

Framework for mobile application development has certain requirements. They must support HTML5 or JavaScript. Most of them support both and CSS. Correspondingly, they must be open source and offer some version of a free application. However, the requirement does not include some open source packages like Xamarin and Trigger.IO.

5 frameworks below are ‘write once, run anywhere’ programs like jQuery Mobile, which is lighter, and other products similar to native applications. Thus, make it easy to port code or reuse between iOS and Android. However, most application developers do not require large-scale cross-platform support.

How To Choose The Best Mobile App Development Framework?

Each device can support some of the specific features of your operating system. Thus, understanding the various platforms that support the kind of features you would like might be a great idea.

The support feature is important for the mobile app development framework.

This remains an important tool for many mobile application developers’ consideration. Shopping for appropriate structures or officially supported induces a sense of risk on any device you may have. However, this is because you must be putting some layers of abstraction between the code running and the target platform.

This is, in fact, the main thing you should always think about when you are developing any application. However, the fastest running mostly comes from true native applications on any iOS or Java (Android). It is important to note that the speed difference is essential for most applications.

Always worth thinking about any experience you may already have or knowledge that can be easily accessed externally. It is crucial to evaluate and understand the type of expenses that may be incurred in developing any individual application with all available resources.

The ionic framework is a complete open-source SDK for developing hybrid mobile apps.

Ionic provides tools and services for developing hybrid mobile, desktop, and web applications based on progressive technologies and modern practices of web development using web technologies such as CSS, HTML 5, and SASS.

In particular, mobile applications can be built with these Web technologies and then distributed through stores native applications to be installed on devices using Córdoba or capacitor. 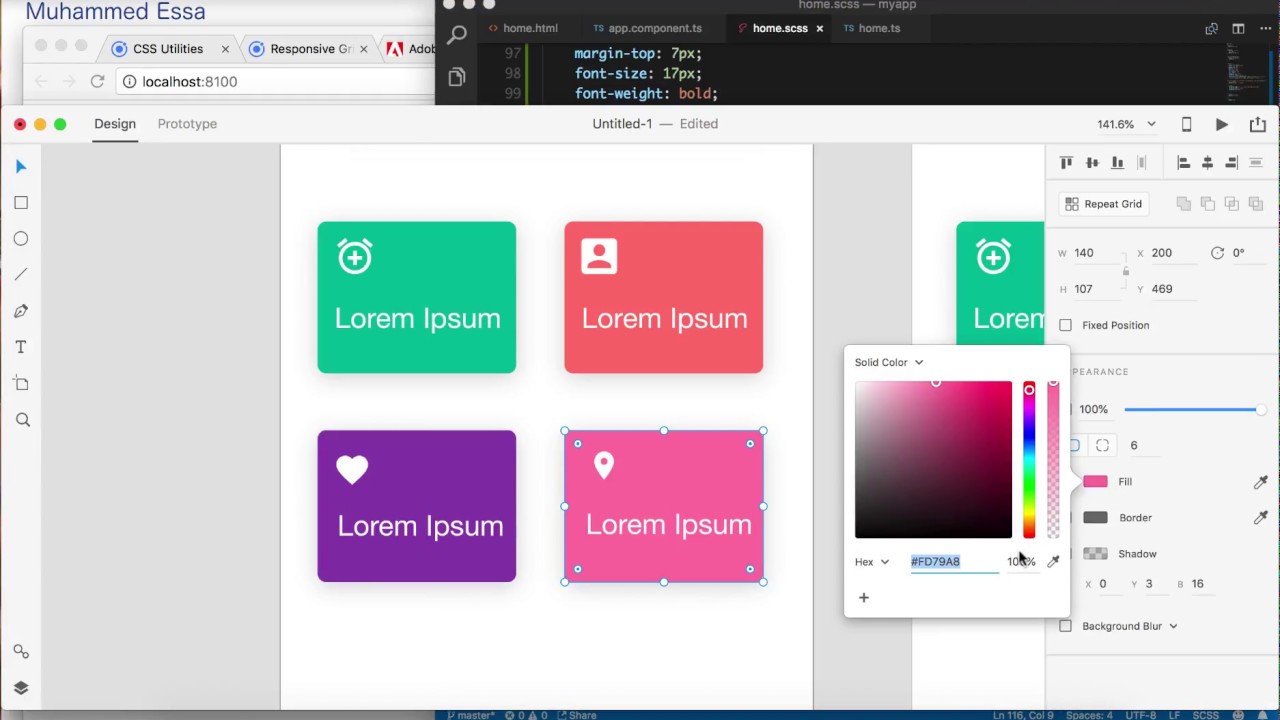 Ionic allows construction and deployment wrapping around the apache Cordova construction tool or a capacitor with a line tool ‘ionic’ simplified command.

Using Web components and custom components Ionic provides methods for interacting with them.

jQuery Mobile by jQuery Foundation is based on jQuery.

It’s an advanced lightweight framework but lacks many features offered in other packages.

It has a large user base. Its features include semantic markup, them able design, progressive enhancement, PhoneGap / Cordova support.

There is not much for native-like function and performance or an advanced user interface UI. 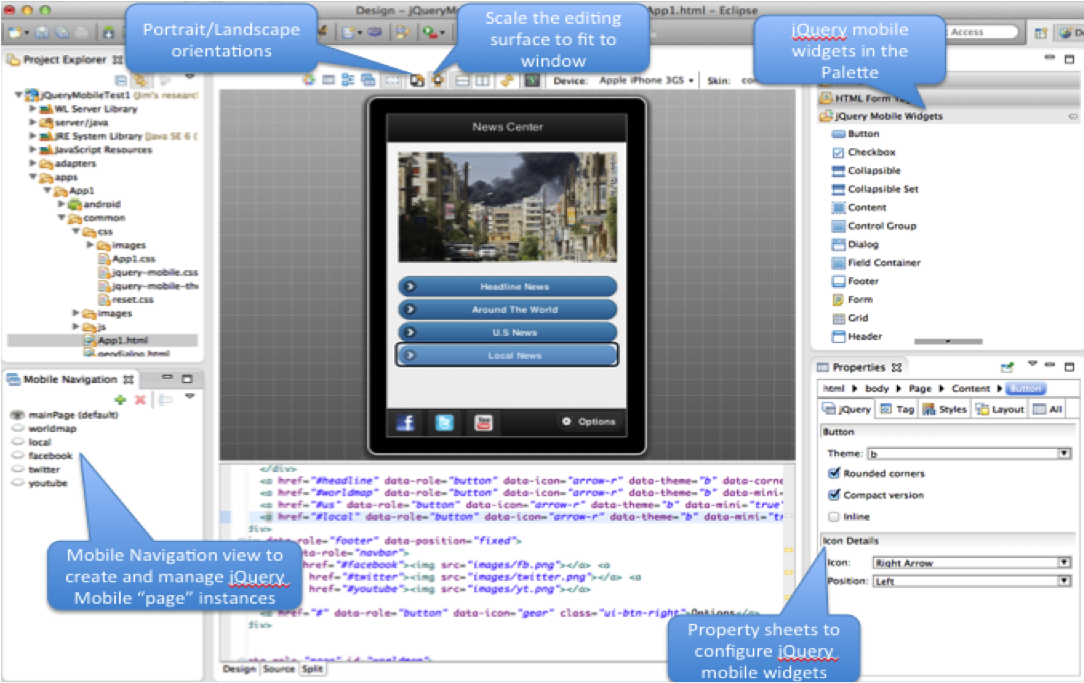 The development focuses on creating a framework compatible with a wide variety of smartphones and tablet PCs. The jQuery Mobile framework is compatible with other mobile application frameworks and platforms like PhoneGap, Worklight, and more.

This HTML5 jQuery JavaScript framework-based open source is a commercial version. Thus, it is favorable to companies that offer a wide range of user interface widgets and plugins.

Kendo UI is very popular because of its different themes, pre-construction design, and styling material. Correspondingly, it has a theme builder for custom themes also.

Other important features are angular and integration UI Bootstrap and performance optimizations.

With Kendo UI it is possible to create rich smart applications for any device having HTML5 and JavaScript browser or platform. Thus, it has beautiful themes to choose from.

These are ready to use and no need to do any coding. Most topics are popular Office 365, SAP Fiori, and materials design. There is a tool StyleBuilder that allows users to customize these ideas.

There are training sessions on its website with practical exercises to make learning easier, faster more effective.

This is an open-source project that combines angular JS and a modified version of the Bootstrap Twitter frame with a mobile user interface.

Retaining bootstrap syntax for easier portability to the mobile from the web while adding Bootstrap to the mobile components that are missing it.

Original Bootstrap 3 is stripped from the media response query which is placed in separate files.

FontAwesome icons are included by default instead of Glyphicons. It has made development easier and more fun. 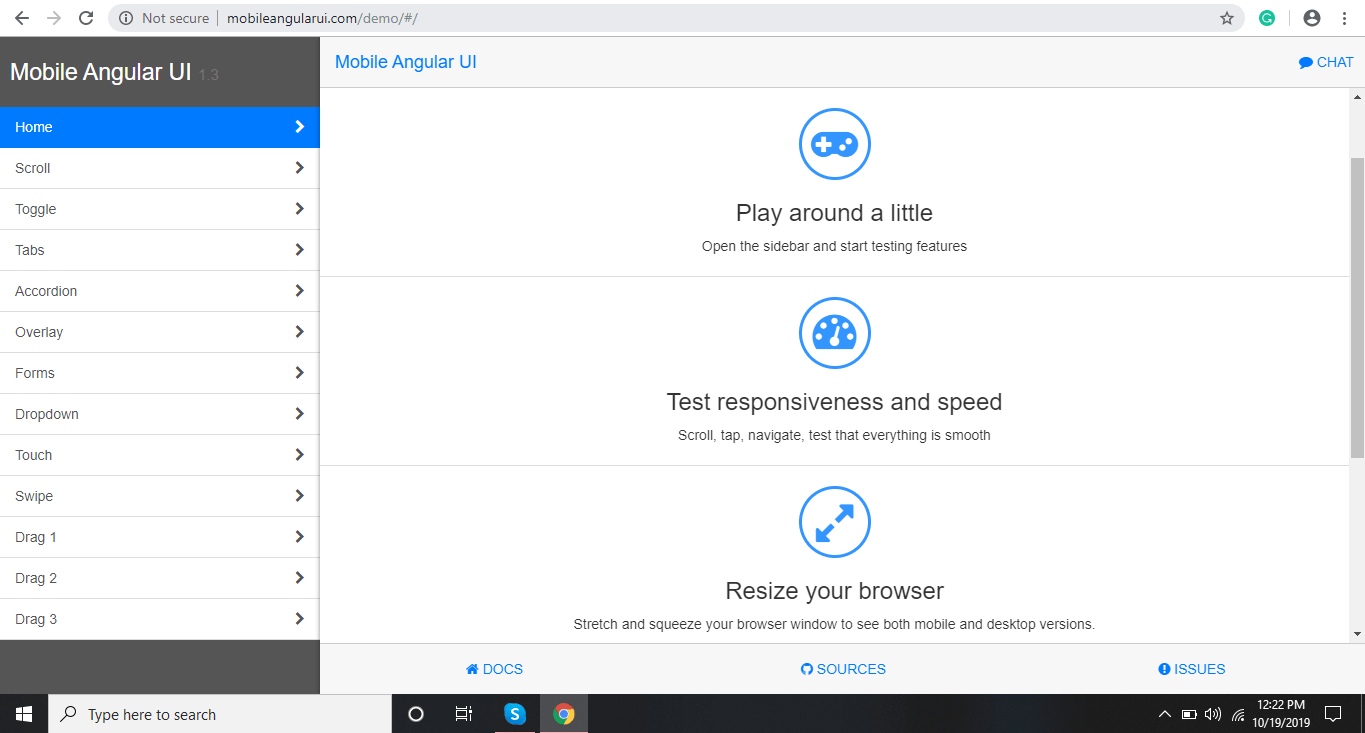 The Mobile Angular UI is designed to meet the development needs of the mobile user interface. Using this framework for mobile application development is easy for those who know twitter bootstrap and angular bootstrap.

An extension frame Bootstrap angular Mobile UI contains individual mobile components such as overlays, sidebars, switches, and scrollable areas. It is easy to convert a web application into a mobile version by adding a CSS file in this framework to make the app touch-sensitive and responsive.

Onsen is based on HTML and CSS. It works with Cordova and PhoneGap that are not already present.

You can also work with jQuery and angular. The program focuses on the development of user interfaces.

It is given a wide range of user interface components and web-based features such as views of two columns for the tabs (Design of material missing).

This framework is well documented. It is targeted at jQuery Mobile users looking for ease of use with more features, user interface functionality, and performance. Onsen is the fastest way to build an amazing hybrid and mobile web app.

Aerodynamic development has zero configuration time with popular technologies such as JS and HTML. No need to constantly update the SDK platform. All the necessary tools are in the cloud.

CLI (command-line tool) is powerful. The tools are integrated with application debugger remote and construction, live-recharge function, and many features of the cloud.

Animations in the user interface Onsen are a compatible wide range of devices, including devices of the lower end.

Onsen’s user interface apps are present in over 100 million mobile devices. In addition to it’s easy to learn to use UI components of Onsen. Packages of Onsen today are newer than that a few years ago.

In recent years, mobile frameworks have had a lot of benefits because of the frequent use of HTML5. Its components have greatly improved for better performance and functionality of the native applications.

What are the basic types of web frameworks?

if I want to develop software Which front end framework should I use?

Front-end frameworks are the major blocks of any software development procedure. React is employed for building the user interface, chiefly when you require to build single-page apps. Angular increases the performance of browser-based apps by dynamically modernizing the contents in much less time since it implies two-way data binding.

Through the latest framework, it is possible to apply modern user interface UI styles such as Google’s Material Design. All frameworks have specific features that help develop a user-friendly powerful app.

If you intend to develop a game or an application that requires a lot of specific device functions, going native is probably best for you. But if your mobile application will be relatively simple, is multiplatform is the best option, because it saves time and money.