The majority of web developers have an excellent grasp of React chart libraries and graphs. They gather data from the database and display it in a useful manner while working on a project.

Creating user-friendly, top React Chart libraries is difficult. It is not advisable to spend an excessive amount of time producing visualization. Data is not aesthetically attractive on its own, but we can make it so. Charts make facts visually appealing and simpler to comprehend and remember. People are more engaged with information when they can concentrate on pictures.

When developing websites or apps, there are several methods for displaying charts. You may choose to build your charts from scratch to create one of the Top React Chart Libraries.

What are React Chart Libraries? 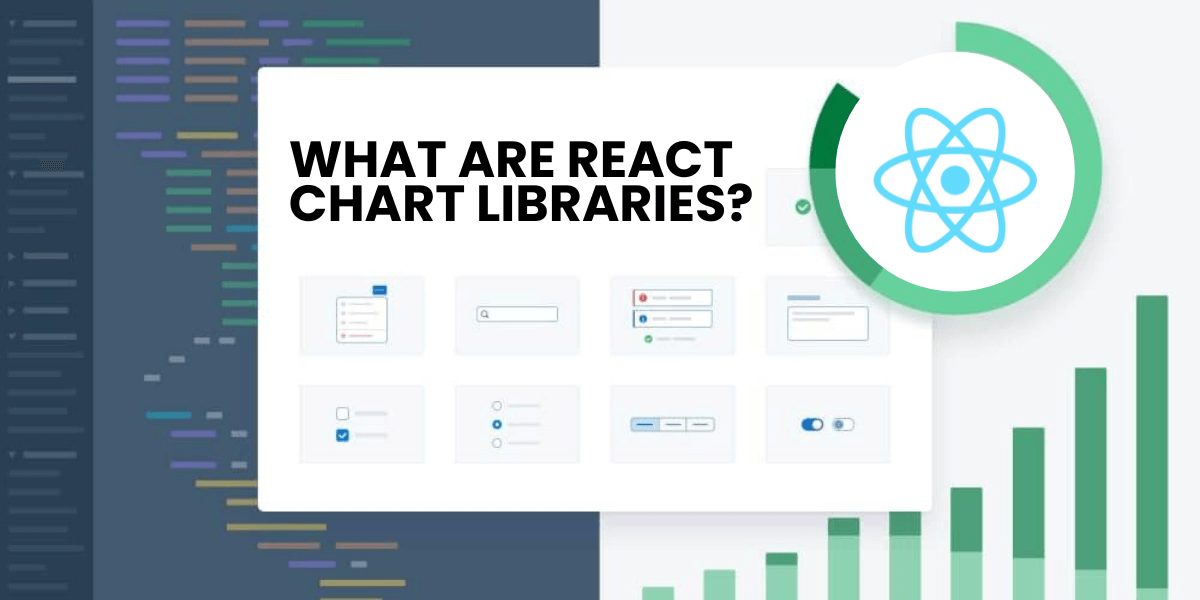 To understand React Chart libraries, you must first understand the React Environment. Many data visualization frameworks ease the development of interactive, responsive, and even animated charts that simplify data visualization. Hence facilitating the integration of line, pie, bar, and candlestick charts into React and Web Applications Development.
A React chart library, called reacting applications, enables React Data visualization in the form of React graph visualization libraries. These are scalable applications that aid in managing data. They are responsible for building React Components for a React app while ensuring their long-term functionality and viability.
This enables developers to show how a given feature will function and focus on providing real data. React charts package helps you to effortlessly tackle complicated issues and overcome React data visualization challenges.

The Ultimate How to Choose React Chart Library? a Few Metrics Checklist

In this part, we will look at various trustworthy measures that influence market perception and reliability dependability.

Click Here
GitHub is an excellent tool for storing and managing code for developers. Developers may focus more of their attention on certain repositories based on their traffic. GitHub is reasonably secure, taking the essential efforts to safeguard its users’ information.
With millions of users, repositories, and projects, this web-based control system provides enough chances to sync, record, modify, and host your code.

Click Here
The origin of the word NPM can be traced back to when it was first developed as a package manager for Node.js. It positions modules so that node can locate them and intelligently resolves dependency conflicts. NPMJS is highly adaptable to accommodate a vast array of use cases. It is used to publish, find, install, and build Node applications.

Click Here
NPM Trends, a free search engine that analyzes search queries for NPM packages. It gives results with more documentation data, and might provide some insight into the level of support. Its objective is to compare the popularity of two or more packages, providing an alternative to npm. NPM Trends is conceptually comparable to Google Trends.

Click Here
Stack Overflow assists users in locating the answers they want when they require them. More than 100 million individuals use our public Q&A platform every month to ask questions, learn, and exchange technical expertise. Stack Overflow for Teams, an adaptive knowledge management and collaboration platform, is altering the way people work.

Best React Chart Data Visualization Libraries to Use in 2023 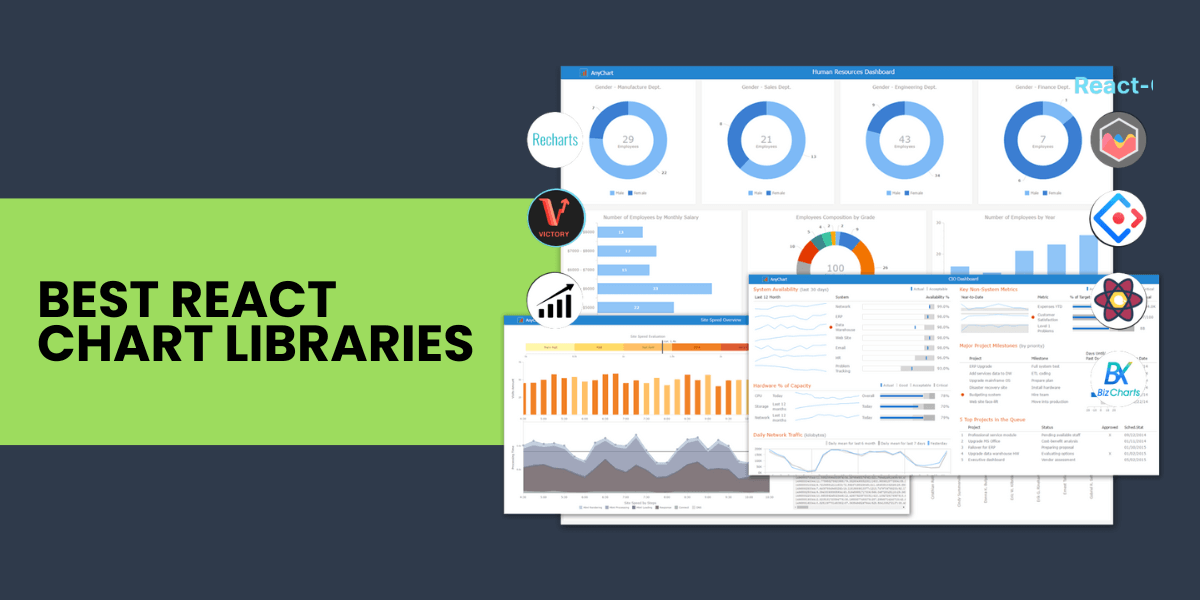 The majority of React apps integrate data visualization in some manner. This applies to any language, not just React. Charts, graphs, and other data visualization are now some of the most common components of mobile and online apps.

Before integrating a library or component into your React project, you should consider a number of factors. In addition to React chart libraries’ functionality, you should also examine its documentation, performance impact, library dependencies, and licensing and maintenance fees.

Click Here
Victory is a system of dogmatic, but completely overridable, React components for creating dynamic data visualization. Victory, like many other React chart libraries on the list, is developed using React and D3. It includes a large selection of completely configurable charts out of the box.
As beginner-friendly, it offers SVG drawing capability and customizable animations of excellent quality. Additionally, Victory delivers responsive charts that function effectively on all screen sizes.
The ability to create iOS and Android apps is a significant benefit of utilizing Victory. This is because the React Native version of Victory employs a nearly similar API as the online version.

Click Here
React-Vis is one of the most user-friendly React data visualization libraries. If you’ve already dealt with React components, you’ll find it simple to utilize the react-vis components since they superficially resemble.
React-Vis allows the development of several sorts of React data visualization charts, including line, bar, and pie charts, among others. It supports animated charts driven by React Motion and gives appealing, configurable charts out of the box. React-Vis also supports drawing in Canvas and SVG. React-Vis does not need in-depth knowledge of any data visualization libraries.

Click Here
Recharts, one of the best React Chart Libraries, offers easy-to-understand documentation and competent project maintainers.
Recharts adheres to the React component idea by allowing users to create charts using its reusable React components. It just provides drawing support for SVGs and no support for mobile. Recharts offers stunning charts out-of-the-box as it modifies the current component’s properties or by adding new props. By default, the charts are not responsive, but a wrapper component may make them responsive.
Recharts has been around for some time, therefore it has a substantial user base and community. You can quickly begin using recharts by using its CDN or installing it with npm or yarn.

Click Here
If you have previously used Chart.js with React, there should be no learning curve associated with utilizing this library.react-chartjs-2 is a React wrapper as one of the top React chart Libraries. react-charts-2 is compatible with many Chart.js capabilities.
react-chartjs-2 only supports canvas for drawing and renders on the client side. It has more than 4,300 ratings on GitHub at the time of writing. react-chartjs-2 enables animation and delivers responsive charts by default for the majority of its charts. The library includes components for many chart styles out of the box and also permits customisation.
This library runs very well across all recent web browsers and has a big user base and excellent maintainers. It is installable using npm or yarn.

Click Here
Nivo, among the top React chart libraries, was developed using React and D3 and offers a selection of chart layouts. The package includes HTML, Canvas, and SVG charts, supports client-side and server-side rendering, and is compatible with animations.
It includes a broad variety of attractive charts. Many of the charts it offers are responsive by default, allowing them to fit nicely on screens of varying sizes.
Nivo has more than 9,200 GitHub stars at the time of writing. It has a lively community and active maintainers, and an attractive website with comprehensive documentation. Nivo is installable using npm or yarn.

Click Here
Visx, a new name in the domain of React Chart Libraries has achieved around 15.3k stars on GitHub, which is a big accomplishment. The greatest benefit of using Visx as an active repository is that it systematically combines the advantages of React DOM with D3.js.
The Visx creators do not claim that their library is a React chart library. Instead, they see it as a collection of readily re-usable low-level graphical components.
Visx is easy to use and allows you to develop reusable chart components. It uses D3 to conduct the computations.

Click Here
Rumble-charts is one of the simple and refined React chart libraries and data visualization libraries. Rumble Charts is a React component that enables the development of adaptable and modular charts.
According to the library’s creators, React components for generating composable and flexible charts to show your data. Unfortunately, it is not consistently maintained or updated with new features and is D3.js-powered.
It is composable and adaptable. Rumble Charts is based on D3.js and uses Built-in functionality.

Click Here
Another well-known company with its own React chart libraries on GitHub is Alibaba. Their charting library emphasizes G2 and React for commercial applications.
BizCharts is compatible with the ES6 React syntax and has a superb template library. However, the documentation and the gallery itself are all in Chinese. Such React chart libraries have a restricted audience that is mostly Asian. It is user-friendly and very expandable.
Additionally, it supports the majority of data visualization charts.

Click Here
React Stockcharts is one of the React chart libraries that is essential for anybody who wishes to examine stock chart data in a number of versatile and intuitive formats. React stock charts are a one-stop solution for web developers searching for a framework for React data visualization Libraries.
You may monitor and show the stock price of any firm over a specific time using charting and range tools. This component features zooming, panning, tooltips, crosshairs, trackballs, period pickers, range selectors, and events to make stock charts more interactive.
It offers highly configurable stock charts and a versatile API for developing top React chart libraries.

When selecting React chart libraries for your project, bear in mind that they were all created to aid developers in accomplishing a certain objective. Analyze their features and functions prior to deciding which one is ideal for your project. Some chart libraries are more suitable for smaller projects, while others are more suitable for bigger ones.
Echoinnovative IT is a Full Stack Observability Platform that enables you to examine application-specific errors. When your hire our dedicated developers, it benefits your business by providing a full picture of your application, including how it functions, where performance bottlenecks occur, which users are most affected, and which faults damage your frontend, backend, and infrastructure code.

What are React chart libraries?

React chart libraries aid in the React data visualization, whether in the form of React graph visualization Libraries or any other method.

Why should you use React charts libraries?

It offers the following

Is React appropriate for data visualization?

React developers rapidly found that managing D3 and making React work with it was difficult. The community of React data allows you to rapidly and simply create data visualization using reusable React components.

.Net Vs Java 2023: Which One Is The Right Choice For The Future?

Get In Touch With Us