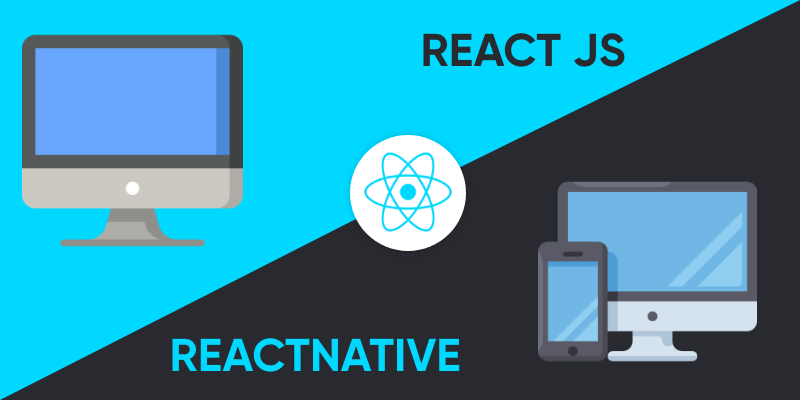 Reactjs and React Native are the new web and incredibly popular mobile development technologies in the app development industry. Both the frameworks were launched by Facebook and the project was initiated in the year 2011 by Jordan Walke, a Facebook software engineer. Since their launch, these platforms have maintained their fan bases successfully. Both the frameworks are so similar at the core but there is a significant difference between Reactjs vs React Native.

A comparison between Reactjs vs Reacts Native is so fascinating and forces developers to think about developing web apps, mobile apps, mobile responsive websites, etc.

In this blog, we’ll compare the benefits and drawbacks of Reactjs vs React Native, as well as explain how React Native differs from Reactjs.

React Native is an open-source library for the JavaScript framework, which is used to create iOS and Android mobile apps. The framework is based on Reactjs, however, instead of being aimed at the web, it is aimed at mobile devices. JavaScript is useful for creating cross-platform mobile apps.

As a result of JavaScript’s ease of use, app developers can create apps that appear to be truly native. These applications are made using JavaScript and XML-Esque markup. It has the ability to build platform-specific code.

When a developer uses React Native, the framework recognizes the platform and generates code that is appropriate for that platform. It encourages faster application development and seamless code exchange between Android and iOS without compromising the end-user experience.

The most notable benefit of React-Native is that it converts your markup into Native UI elements that run in parallel with your working platform.

It uses a dedicated UI thread to maintain excellent application speed without compromising its functionality.

At its Finest, Enterprise Mobility

Because the framework is free and open-source, many members of the community are continually working to enhance it.

The technology includes all of the elements that developers need to include in mobile apps.

Significant Support From The Community

In the community, React Native is the most popular and desired technology. In the development of mobile applications, developers are continuously striving toward usability.

The vast community also keeps developers up to date on the newest trends and assists with problem-solving.

The framework works with any platform. As a result, there is no need for developers to update the code for Android or iOS.

The same principle applies to both platforms without jeopardizing the user experience.

JavaScript is used as a scripting language

They don’t have to worry about the code compilation in the browser. It is by far the most used scripting language.

As a result, development difficulties are resolved thanks to community support.

React Native is a 2015 technology, so it is still relatively new. As a result, the limitations that come with using a new technology also apply here.

Abstraction Layer with a Loose Hold

Along with JavaScript code, the framework features loosely held stylesheets like CSS and tags like HTML. It raises the likelihood of logical situation disputes.

Issues With Patenting And Licensing

Despite the fact that there is version 2 with patent rights accessible, Facebook can still prevent the developer from functioning on the platform if it does not approve of the method.

React Native is currently in beta. As a result, debugging and compatibility concerns continue to plague the developers.

Reactjs is an open-source JavaScript framework for building user interfaces for web apps.

It encourages the construction of reusable user interface elements. Reactjs hides the DOM from developers and provides a more straightforward programming style.

By leveraging React Native, Reactjs can power Native apps. It’s in charge of a web application’s view layer. Reactjs allows developers to design a complex user interface by utilizing components, which are isolated pieces of code.

It is divided into two sections: the component and HTML code for your UI, and the HTML page in which all of the components will be presented. Facebook created it in 2011 and it has grown in popularity since then.

Reactjs simplifies the app development process without sacrificing UI quality. It is regarded as user-friendly by the community and aids developers in creating very attractive websites and applications.

Components that can be reused Encourage faster growth

It provides developers with reusable components that they can use to create new applications.

The developers have permission to reuse the components they’ve created in other projects. As a result, the development time becomes half.

Because of its component-based architecture, Reactjs reduces the need for frequent debugging.

Reactjs uses Virtual DOM, a JavaScript object. HTML can be written using JavaScript by the developers.

The tree reconciliation technique is used by Reactjs to render this HTML visually. It facilitates faster web application performance because the entire DOM does not need to be updated repeatedly.

Code That Is Stable And Has A Unidirectional Flow

As a result, changes in smaller areas only require updating the data model, not the complete state.

Despite all of the benefits, there are a few drawbacks to using Reactjs. Technology evolves at a tremendous speed, and keeping up with it is challenging.

Due to the rapid evolution of technology, it is difficult for developers to upskill in a shorter time period.

Anyone can develop support documentation for ReactJs because it is an open-source framework.

These resources can be useful or underdeveloped at times. Documentation for the most recent trends and upgrades is delayed due to rapid evolution.

Although JSX syntax is simpler to use, some developers find it difficult to grasp. As a consequence, think of JSX syntax as a roadblock to mastering Reactjs.

ReactJs supports many third-party libraries, although Native libraries are less in amount. The learning curve for ReactJS becomes steeper as a result.

Reactjs vs. React native: which is better?

Reactjs and React Native are crucial pillars for app and web development, and they’re getting momentum with each passing day because of their versatile features and a growing ecosystem of libraries.

While Reactjs is essentially a JavaScript library and React Native is the whole framework, the former serves as the heart of the latter and complements it.

Reactjs and React Native, like every other technology or framework in the developer world, have limitations. As a result, before making an informed selection based on your priorities and expected outcomes, you should map the pros and downsides of both of these technologies.

Are you still unsure about the ideal framework? While each of these frameworks has quite a lot to offer, it’s important to remember that Reactjs and React Native are key components for web and app development. Furthermore, both platforms are gaining traction with each passing day due to their versatile functions.

Regardless, each of these instruments is a formidable competitor and leader in their respective fields. As a result, it is necessary for the company to conduct an extensive study and map the benefits and drawbacks of the framework it intends to utilize in the future. Once they know what to expect from the framework, they may establish priorities accordingly.

Are you looking for sound guidance to help you with your project? We’d advise you to seek the guidance of a professional app development company rather than a developer who may be knowledgeable about one framework but is unable to assist you in making the best selection. Get in touch with our experts today!

How to Develop a Used Furniture app like Wallapop?

Angular vs React vs Vue: Which Framework You Must Choose