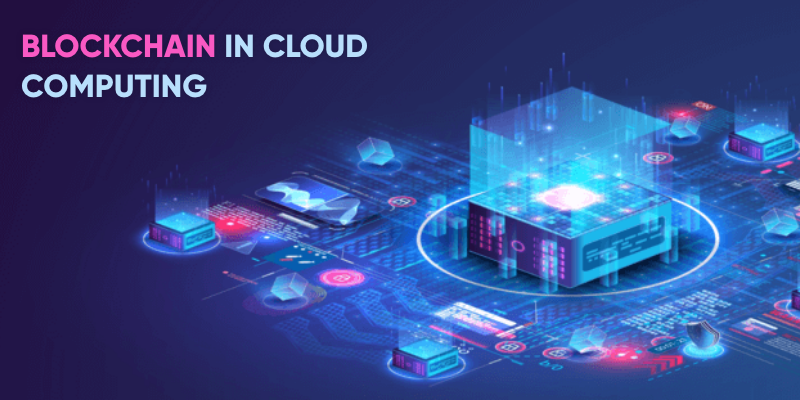 Blockchain consists of various features which give significance to it like decentralization, transparency, and security. These features have made Blockchain a revolutionary and promising technology of several industrial uses for the modern generations today. With the interlinking of cloud computing and the Internet of Things, the Cloud of Things field came into existence. Here blockchain serves as a solution that can face the challenges that arise in the Cloud of Things with the help of decentralization, data privacy, and security of the network. Elasticity and scalability functionalities of Cloud of Things enhance blockchain operations for enhancing the overall efficiency of blockchain operations. 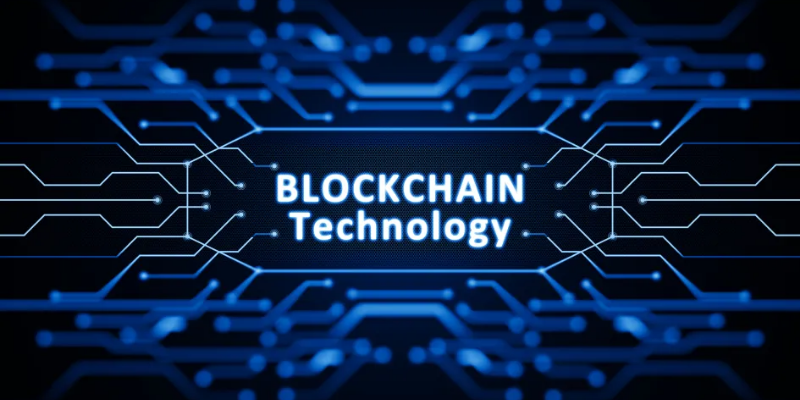 It is a booming technology in the modern market used by worldwide enterprises for storage, security, software development, and online transactions. Blockchain technology allows records of the ledger databases immutable, unlike cloud computing.

The technology provides a linked list-like structural ledger database for storing transactional records known as blocks and integrates them with the link known as a chain.

Blocks, nodes, and miners are three essential concepts of blockchain. The system generates nonce (a 32-bit whole number) after the block generates. All the data in the blockchain resides within the block.

Records signing takes place cryptographically with the use of distributed consensus or protocol to validate these immutable. This feature of blockchain calls for the demand for robust transaction implementation in multi-structural business environments.

A blockchain contains a link to the previous block and has the information about it so it refrains from modification of any data in any of the blocks after the data is recorded once as it also changes the data in other blocks.

What is Cloud Computing? 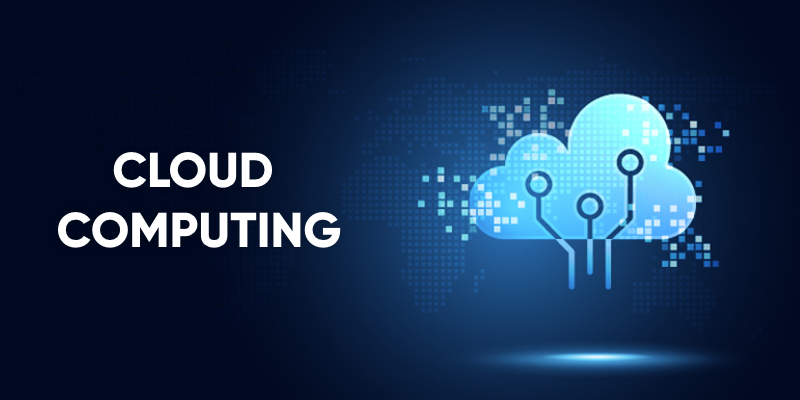 Cloud computing technology renders a model for efficient access to components and services for top application development and integration.

Hence, worldwide enterprises and organizations are switching from traditional computing architecture to cloud-based architecture for management, maintenance, and security.

Benefits of Blockchain in Cloud Computing 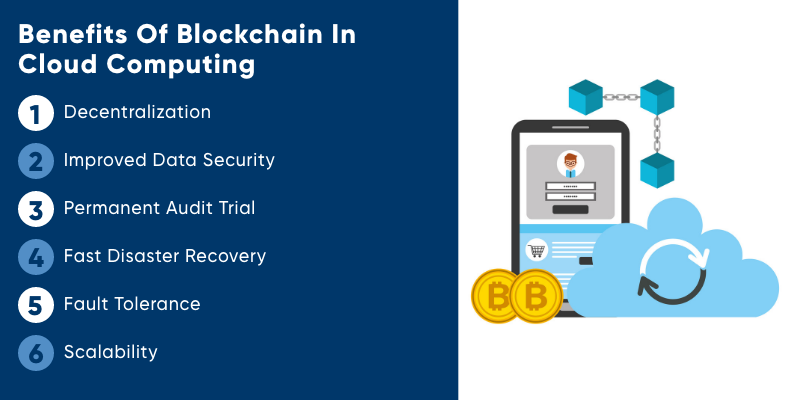 Dependency on a centralized server for managing data and taking decisions can risk the whole system if it fails and major important data loss stored in the central server can be incurred. Also, a hacker attack is a threat to the central server. The blockchain in CoT can provide a solution by enabling a decentralized system where multiple replicas of the same data are stored on different computer nodes. The problem can’t arise as there are already multiple copies of the data present on multiple nodes.

Data security enables point-to-point encryption during its transfer and storage. Data stored in IoT is more often concerned with personal information and the leak of this data can harm personal security. These situations created in cloud infrastructure pose a threat. The solution to this problem is the use of blockchain in cloud computing, which has the potential of providing enhanced security to the whole architecture and keeping the transaction of the data sequentially. Various nodes stores data files after splitting them into various encrypted fragments.

One of the main benefits of blockchain is its lasting audit trails in cloud computing. Blockchain maintains a permanent Proof of History (PoH) for all past transactions and alterations which supports a verifiable delay function. It doesn’t only allow PoH but also helps in organizing in the correct order and maintaining a timeframe of the transaction information.

With the help of collaborative Clouds, blockchain data can be replicated across a robustly interconnected network of computing servers. Because of the disruption of any cloud node, the single-failure risk is minimized and uninterrupted services are enabled.

For enabling scalable blockchain services it is very crucial to have strong data processing services for high transaction execution as the number of blockchain transactions can be huge on large-scale blockchain applications. Due to scalability capabilities in this field, blockchain operations can be supplied with on-demand computing resources by the cloud. Thereon, the integration of cloud computing and blockchain can anticipate a highly scalable integrated system.

Scope of Blockchain in Cloud Computing

We will see how the applications of blockchain can provide vast scope in cloud computing and expand its scope.

Integration of Blockchain and Cloud Computing 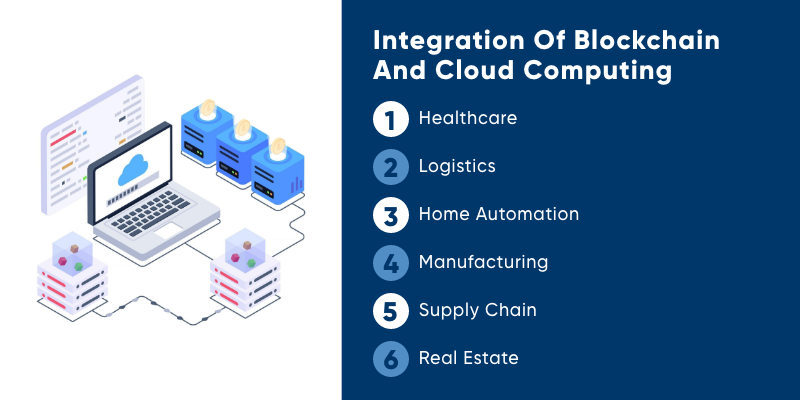 Betterment of the Healthcare Sector

Blockchain in CoT proves to have great potential for applications in the Healthcare sector in modernizing and developing the current state of procedures and infrastructure. The Healthcare sector embraces various medical institutions and organizations in it. The major role of this sector is to deal with healthcare-related services, medical equipment, and instruments.

How does Blockchain in CoT come in?

As we have discussed both the terminologies and their features in detail, let us jump on to see the significant differences between them:

Future of Blockchain in cloud computing

Cloud computing tops the list as per the reports on top emerging business risks. In today’s business world, Cloud has become such an integral part. Even with the risk and harmfulness businesses still rely on it. Cloud models exceedingly based on security, compliance, and centralization can give rise to major business risk. Enterprises rushed to cloud computing app development. Cloud computing services, and top mobile app solutions without checking in and risked their data security. Blockchain is positively working in the direction of making business processes, and transactions and making storage safe, fast, and secure. Thus, integrating blockchain and CoT gives the privilege of decentralization and more security that gives authorization, efficiency, and privacy to work with. However, the challenges that blockchain in cloud computing faces are needed to be worked on in the future with the help of in-depth research.

Is blockchain a part of IoT?

No, Blockchain has been implemented with IoT in various industries, including segments like banking services, automotive, management sectors, and Agriculture.

Which is the most used blockchain technology?

Bitcoin- the first highly popular and valued cryptocurrency is the most used blockchain technology.

Kush Patel is the Chief Technical Officer and Managing Director of Echo Innovate IT – a software development company. He is responsible for the overall operations of the company and has played a major role in making Echo innovate IT into a top-notch IT services provider and transforming it into a globally trusted web and app development company.