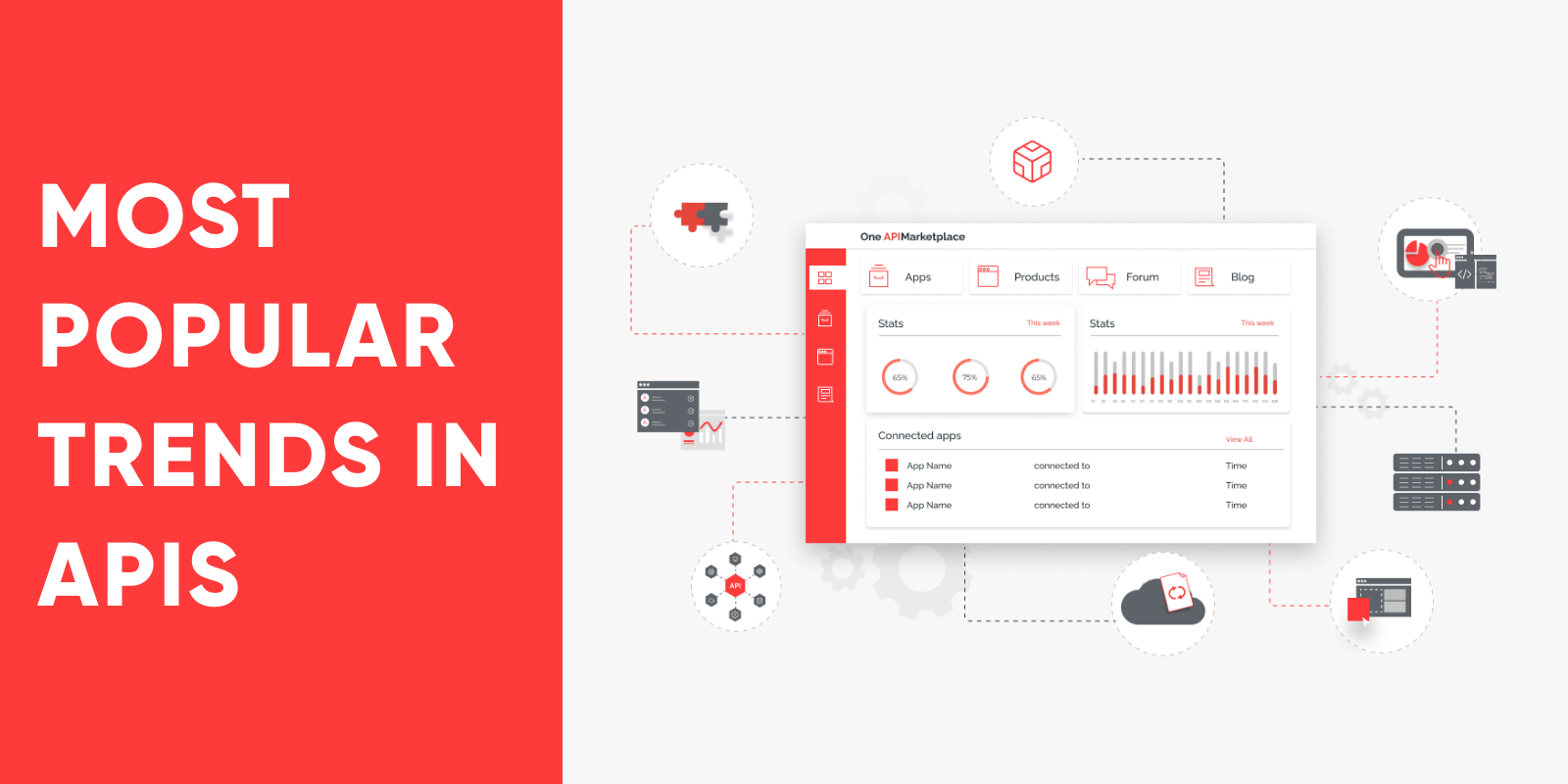 In the process of improving or developing your applications, you will eventually come across a term like API. API integrations provide the necessary tools and resources to build a communicating link between two applications or programs. It’s interface takes lesser time and cost for software developers create complex applications or programs. There is a wide range of variety and a huge number of APIs available in modern browsers that enables you to do multiple alterations in the code you develop. This term has many definitions and contexts, but we’ve tried to explain it in the simplest way possible. Read about the Popular Trends in API in this blog.

API is an application programming interface (API) is the medium by which different software interact. API integrates apps to foster connections between technologies for enhancing user experience.

In a not so tech-savvy language, we can explain that API serves as a waiter in the software world.

The function of both waiter and API is parallel, say the waiter takes orders from the customers, brings them to the kitchen to get them prepared, and after that’s done waiter takes food to the customer. Likewise, API works to facilitate the connection between those software platforms that would not be able to interact any other way.

API is like a well-built block of code that empowers API developers to build user-friendly software.

API is similar to what an open language is which gives the access to your application to interact with an external service with the use of a simple set of commands.

What is the API Used For? 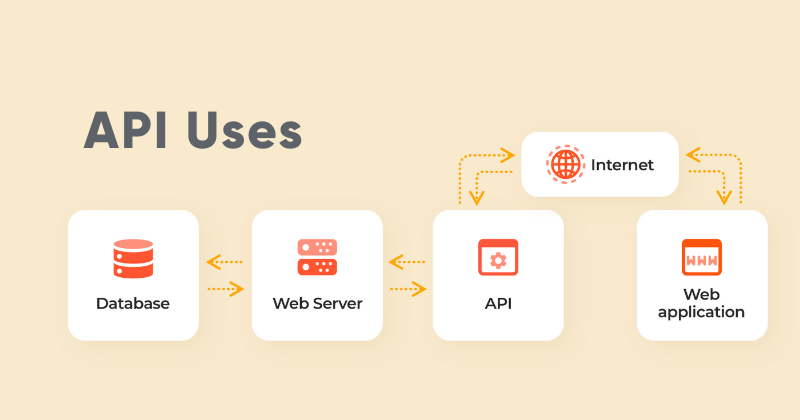 APIs are more often used to abstract the complexity of back-end logic in a variety of software systems.

APIs work to make the data compatible with interacting software by accessing it from particular software. And End users are not directly interacted but after fulfilling their requests derive the benefits. This is why an API is a type of interface and not an application.

User interfaces derive from the software product as a graphical element that users come in contact with and that’s how you’re accessing this very screen.

It is obvious that there is an amplitude of code on the back-end of the development, for navigating any software easily by powering the internal structures.

The front-end is still what end users must control to gain accessibility from one software to another. 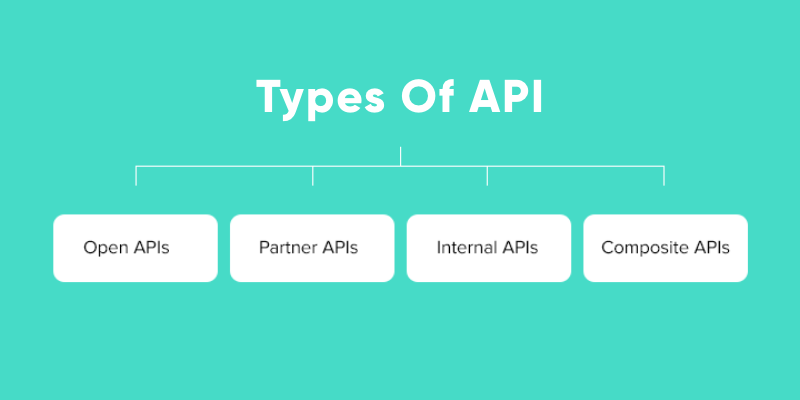 There are mainly four main types of API:

These APIs are also called Public APIs as they are publicly available without any restriction to access.

These types of APIs are exposed only by the internal systems and that is why they are less known and often used inside the company. To be able to improve its products and services, the company uses Internal API among the different internal teams. Internal APIs are known as Private APIs.

This type of API is not made available by the public and to access it one needs a specific right or license.

In this type of service APIs and various data are combined together. As a result of execution and not at the request of the task, it is a sequence of the tasks that run synchronously. The main usage of composite API is to speed up the execution process and improve user performance in web interfaces. 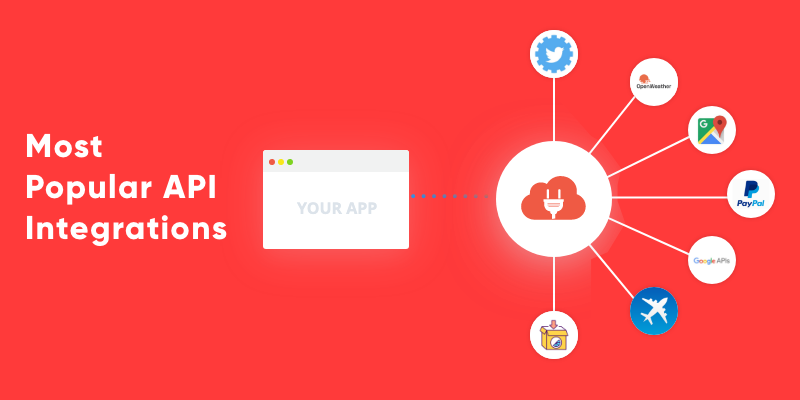 Twitter Bots are one of the well-known API trends examples. You probably would have come across the bot at one time or another If you have spent a significant amount of time on Twitter. With the use of Twitter API, numerous bots on Twitter automate the tasks. Probably over a decade ago, 24% of tweets were accounted for by Twitter bots but in today’s time, their involvement is even greater. Out of the numerous range of bots, it’s hard to fetch which bot stands out more than the other.

One example of a Twitter bot is @MagicRealismBot, a bot on Twitter that generates magical stories every four hours using a random combination of genre-defining elements. Twitter bot plugs them into a tweet of 280-character. These bots take advantage of Twitter API to work efficiently with Twitter’s interior software system.

Apart from that, the Twitter API is able to tell bots when there is something specific happening on the platform.

At some point in time, you did a Google search for the weather? As a result, a good search input pop-up weather snippet at right front and center on your Google search page.

This common Google feature is an API usage example that is put to use more often by smartphone users several times a day.

Many of us have taken this feature of weather snippet for granted. This is because snippets are a supreme API example, representing how Google coordinates with other software on the web. There are many top API web development companies that empower this kind of functionality.

The API in Google Maps gives users the advantage of almost unlimited geographic aptitude at the tip of their fingers. Google Maps enables you to search nearby restaurants, gas stations, niche shops, and whatever else is in relative distance to your location.

Without knowing you may have been using this API example more often. Google Maps API is in action each time when you glimpsed business hours, reviews, contact information, or anything of that nature from that handy box on your screen.

Have you ever used this popular API trends example, PayPal to pay for something, directly within an eCommerce store? This functionality of logging in using a social media service, the “Pay with PayPal” is built with APIs to ensure that the end application protects the sensitive data and doesn’t let anyone gain access to unintended permissions, and can only do what it needs to.

The inner workings are similar to the log-in process. When the user specifies the amount owed and other information and clicks the “Pay with PayPal” button, the application sends an “order” request to the PayPal API. As a result, a pop-up authentication from the user to confirm their purchase. And if everything is working as instructed, the confirmation of payment is sent by API to the application. The use of API in web developmentor app development makes it API integrated and the data can be secured effectively.

Most travel websites work majorly for the goal of connecting and building relationships and that is why Travel Booking is a great example of API trends. Travel websites like Trivago and Expedia are empowered with the feature to sell all-inclusive travel packages that account for both shelter and travel.

Travel Booking extracts the right information from the flight details to room availability to reservation requests everything with the utilization of Application Programming Interfaces. APIs are easy for machines to quickly and autonomously exchange data and requests and then confirm the trip with the provider they sourced it from.

E-commerce is an act of conducting commercial activities like purchasing and selling products on online platforms. Trademark marketplaces representative of e-commerce is held by both Amazon and Facebook.

We hope that these examples of API trends may have given you a better understanding of how important APIs are in software development. If any top mobile app development agency in the USA is planning any software project in near future, there is no doubt that APIs and data integrations will play a crucial role by API developers as an integral part of the modern development ecosystem.
You Must Also Read Blog on API Integrations in Different Industries:

How does an API work?

An API works as a facilitator helping technologies communicate with one another at the back-end logic.

Where is API used more often?