Home » Blogs » A Detailed Guide On Microservices and its Implementation

The benefits and potential of microservices are recognized by both users and non-users in the current period and the real-time users’ confidence in the future of microservices is great. This may sound astonishing but reports say that 78% of current users say their business will likely increase the amount of money and effort invested in microservices and 56% of business bodies say that they are likely to adopt microservices in a couple of years.

“If you are working in an organization that places lots of restrictions on how developers can do their work, then microservices may not be for you.”

Microservice is an architectural style where an extensive software application is built with separated segments and loosely coupled services. Here, every service performs individually for the focused business function and communicates with each other independently via predefined web interfaces.

Many organizational bodies in today’s market have embraced Conway’s Law to leverage the potentiality of dispersed teams and build efficient and effective microservice architecture.

When should you use Microservices? 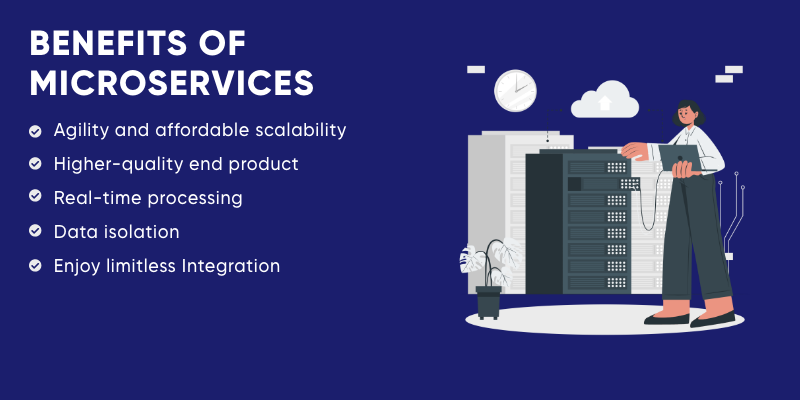 Microservices fit right with both Cloud and DevOps. As almost every company started moving their workload to the cloud and microservices play the role to complement cloud-based application architectures by allowing an app development team to use patterns for say event-driven programming as well as autoscale scenarios.

The main five benefits of Microservices are:

With microservices, segments of various teams can work independently and scale the services as per priority to act within a predefined context, reducing the time of the development cycle, saving cost, and increasing outcome.

Molding the larger chunk of components in various segmented parts helps concentrate on that part specifically. This approach simplifies the overall coding and testing process by focusing on just one at a time and increases the quality of software.

In microservices, a publish-subscribe framework enables the data processing in real-time. Eventually, extensible systems can go through and process a large number of data in real-time.

It is much easier to perform schema updates in microservices as only a single part is affected, unlike monolithic applications where the data is shared among the application.

As the processes are individually segmented into teams the integration of the services is seamlessly unaffected by time. Microservices make sure that the failure in one service doesn’t affect the overall application 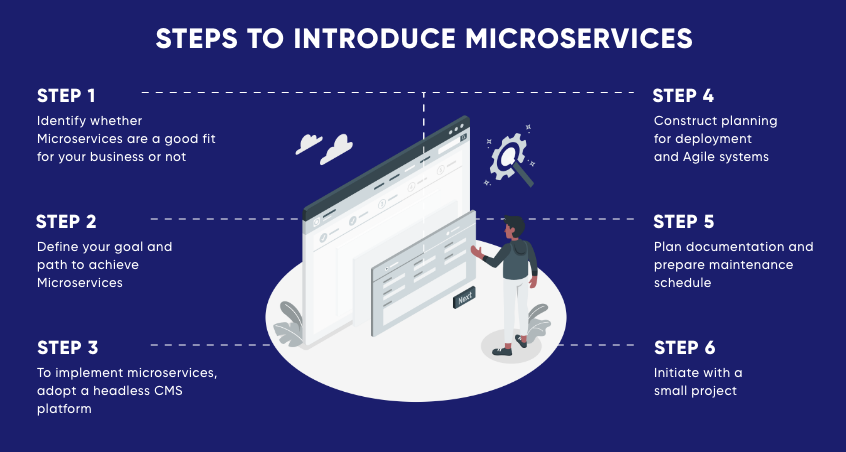 Here is a step-by-step process that elaborates how to introduce microservices into your tech stack following these steps will let you build a project with the use of microservice architecture to reach up to the goals.

STEP 1: Identify whether Microservices are a good fit for your business or not

Initially, you have to determine whether microservices match your business’s perspective and goals. Only after knowing the requirements, capabilities, and outcomes, you should move forward with implementation as the application process will be complex. So, it is mandatory to have the access to adequate software engineering skills and microservices expertise in your team.

If that is not the case, an already created simple application with a monolithic approach will be more suited for your team’s needs. If after determining you think that Microservices is the right approach for your business then you should make a long-term investment for its training and development.

STEP 2: Define your goal and path to achieving Microservices

If the business perspectives and microservices architecture is a good match then it comes to the point where microservices goals need to be defined. A goal map or path should be outlined and the flow of moving towards it should be defined. If you don’t have a plan ready for how this is going to work then because of Microservices’ individual nature to add multiple services may cause complexity and chaos. This step may vary from company to company as every business has different goals and different ways to reach them.

Even though you are building everything from scratch or transitioning from monolithic architecture, this step is important to define the goals and set the boundaries between the services.

This headless architecture enables the development and deployment of the back-end independently of the front-end architecture. It simplifies the process of implementing microservices as you will be able to develop each service independently as well as makes it even more efficient.

This will give access to your team to build, optimize, deploy and manage the content modules without interfering with the design and development that goes around on different channels and devices.

Adapting to CMS will let you use the modern technologies independently without holding you back.

Build agile teams which are cross-functional and small for the implementation of the project. Deployment systems should also be kept short and similarly agile development process cycles for quick and easy integration and deployment.

It is crucial for you to be diligent while stimulating and collaborating on new architectures among the teams to avoid cache.

Numerous microservices performing concurrently in various departments might create a state of fuss for the based marketing platform.

Planning for ongoing documentation and maintenance as monitoring and recording errors can keep all the parts moving smoothly together. This culture can promote the concept of keeping high-quality technical documentation and algorithms which go conjointly with the coding.

After following the process make sure that everything is in its place and release a small microservice project at first before implementing it completely.

It doesn’t matter if you are transitioning your entire business with microservice architecture or just adding a few services,  swiftly rolling out just one microservice initially can give a better understanding of its requirements and run the decoupled architecture efficiently.

With this, you will be able to figure out where you are lacking or failing and learn how to hold out in a controlled environment. 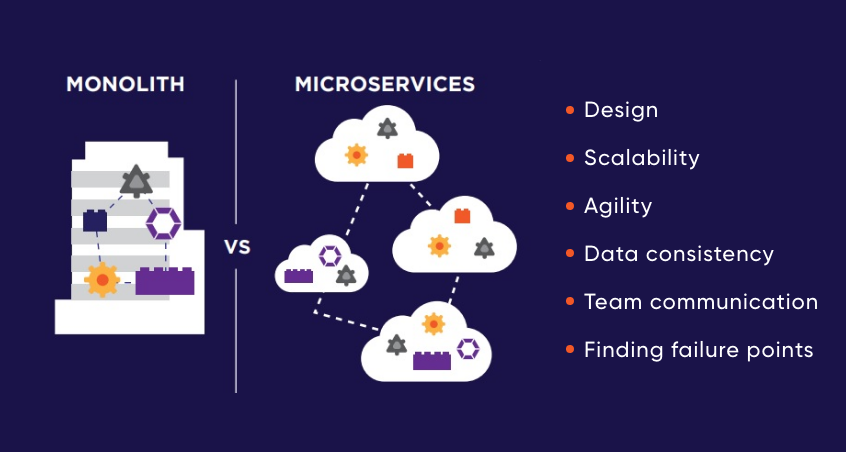 Explaining monolithic architecture – An application developed with monolithic works as a single unit, where all features, functionality, and segments are closely-bounded for integration, deployment, and development.

Microservices are independently scalable but in monolithic it is a bit challenging due to dependencies between services & reusable sub-components.

The process of service start-up is relatively more rapid in microservices than in monolithic.

Data consistency is quite more difficult to achieve in microservices than in monolithic.

Monolithic does have comparatively straightforward team communication than microservices.

In the architecture of microservices, it is quite difficult to find failure points but the same process is quick and easy in monolithic. 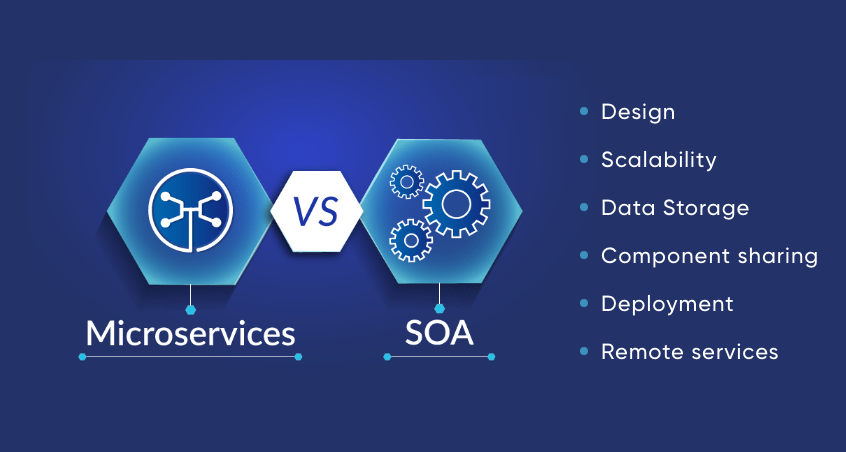 Service-oriented architecture (SOA)– Created as a response to the traditional approach for decoupling an application into smaller segments. And to meet specific business requirements these individual service segments intercommunicate. It is often considered by many developers that microservices are a subtype of SOA, while few insist that each works on a different set of problems.

In microservices design patterns, services are built-in smaller units. While in SOA services size can vary from small to large.

In terms of scalability, microservices are independent but in SOA it is a bit challenging due to dependencies between services & reusable sub-components.

Each microservices can have independent data storage, unlike SOA which involves sharing data storage between services.

The deployment process in a microservices architecture is very quick and easy unlike SOA’s less flexible deployment and it is one of its best characteristics.

Microservices in general can be proven valuable for the development and growth in various sectors like healthcare, online marketplace, eCommerce, social media networks, finance, and many more. To understand the concept of how it can be utilized practically we can see the below-mentioned usages:

Only because of the microservices architecture examples discussed below it was possible to make the world understand how the transition from monolith to microservices could make a change!

Netflix is surely considered a role model by present-day cloud-based companies for using microservice architecture. Netflix, known for streaming various content of different languages online has started building up its microservice architecture on AWS in 2009. Within just two years, Netflix relocated to microservices from a monolith partitioning it in stages. In the initial stage, they adapted changes in movie encoding and other applications which are not used by customers. Then they shifted to decouple customer-facing segments like movie selection, account sign-ups, device selection, and configuration.

Amazon serves as the world’s largest online retail platform. For years Amazon was in the habit to run on an extensive monolithic application with many flexible yet closely-bounded components. In consequence, Amazon could not further bifurcate its teams into smaller parts to fast up the speed of its development cycle. Then, the company diverged the code as independent functional services, enfolded with web services, and ultimately advanced to microservices.

Best Buy commenced revamping its eCommerce platform in 2010 with the mission to break the monolithic, closely-bounded application into microservices for the swift rollout of new features and react to market changes in the retail marketplace.

Microservices architecture is the nearest perfect solution to the digitally developing world which needs to deliver faster functionality and reliability. However, the transition from monolithic to microservices can be lengthy and tedious. The suitability of Microservices depends on the project scale and requirements. Usually, they are preferable to modernize legacy systems and also for cost reductions, enhanced collaboration, integrations, and data consistencies.

Angular vs Vue vs React- Comparison

How to Launch an App

When should we use microservices?

Microservices can be used to make a change to functionality when the organization needs it and also to deploy that functionality in a way that it doesn’t affect the rest of the system.

Do microservices have a future?

The microservices architecture market is growing rapidly at a CAGR of 17 percent, putting it on pace to reach $33 billion by 2023 as stated by the reports.

When should you avoid microservices?

When your application size does not justify the need to split it into many smaller components for scalability.