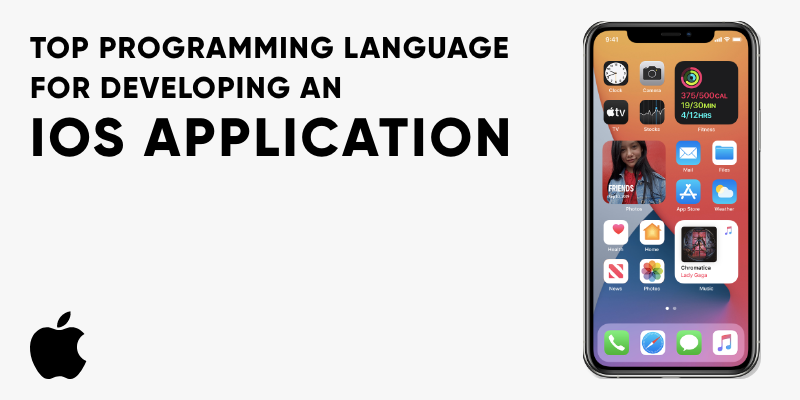 Although it may be done either by outsourcing or hiring an in-house developer, the iOS app development process can be a little complicated. The most important thing to consider is the programming language to choose for writing an iOS app, as there are numerous possibilities accessible, such as Swift, C++, Objective-C, and so on.

Technology is constantly releasing new products to the market that have incredible features. Apps are now getting better thanks to the use of new technologies like IoT, AR, and VR. When combined with the iOS app development trend in 2022, all of these technologies have a significant impact. People will be confronted with a plethora of new trends in the present and future years.

As a result, we have no doubts that iPhone app development is a worthwhile investment. You’ve come to the right place if you’re wondering which iOS development language is suitable for your project.

This article contains all of the most important information that you need to know about the top programming language for developing an iOS application, including: 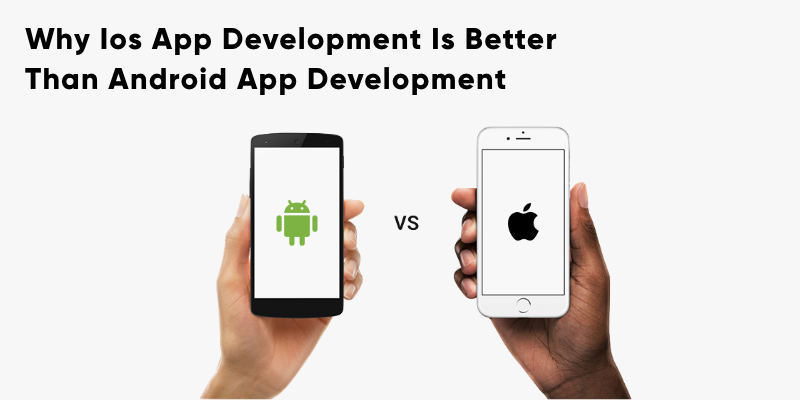 The following are some key differences between iOS and Android app development:

Consider these differences while designing apps, examine your target audience, and decide whether you want to spend less time on development and maintenance.

What do you Need to Know Before Creating an iOS App? 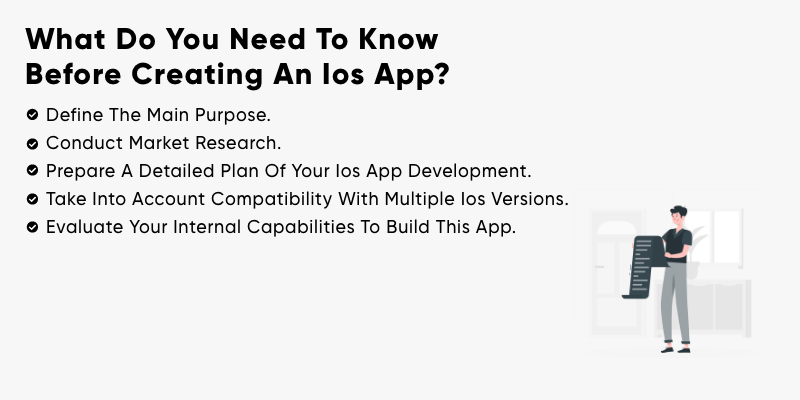 Creating a solid, comprehensive iOS app is a major task that requires careful consideration and planning. That’s why we’ve put together a quick but useful checklist of things you should keep in mind if you want your app to succeed.

Before you begin, think about why you want to build an application and try to answer a few simple questions like:

Why do I want to make this app?

What user requirements will your app meet?

Is there anything similar on the market? If that’s the case, what will make my app stand out?

When you answer these questions, not only will it be easier to convey them to users, but you’ll also be able to better plan future app development.

The next step is crucial, yet many business owners overlook it. To convince people to want to download your application in the first place, you need to get to know them better.

You can create a profile of the average target user based on nationality, age, sex, or other factors using a survey or customer segmentation.

As a result of these steps, you will be able to design personalized marketing campaigns and increase the number of downloads.

3. Make a thorough plan for the development of your iOS app

If you’ve accomplished the first two steps, you’re ready to go on to planning. It should be as thorough as possible and include all relevant facts. A list of things to ask yourself when drafting such a plan is provided below:

4. Consider compatibility with a variety of iOS versions

While iOS app development, keep in mind that not all iPhone users upgrade their devices’ operating systems on a regular basis. So, if your application is only compatible with the most recent version, and your user is using an older version, he or she may not like it and delete the app right away.

As a result, you should concentrate on making your application compatible with all available system versions. It will take longer, but believe me when I say it will be easier than persuading dissatisfied users to reinstall it.

5. Examine your internal resources for developing this app

The duration and expense of iPhone app development are determined by the app’s features and complexity. It’s usually a team effort, with iOS Developers, Frontend Developers, UX Designers, UI Designers, Graphic Designers, and even QA Developers and Project Managers involved.

Furthermore, this team should have a thorough understanding of the market as well as prior experience designing this type of application. As a result, you should decide whether you want to use your in-house team or outsource your iOS app development from the start.

Choosing the right coding language for iOS app development, building & managing these projects, their support, future scalability, and so on all present unique issues.

There are numerous features and options available when developing apps for iOS and other versions of product design. If the application’s memory is overloaded with features and functions, it will become heavier and more difficult to use. This could make the project much more difficult.

Furthermore, because Apple products are updated frequently, you should design tools that are compatible with all versions of operating systems. Many errors will need to be corrected, and new parameters will need to be introduced on a regular basis.

Different iPhone and iPad models have different criteria that could affect how well they work. As a result, the development process should consider the fact that all iOS apps must be compatible with all Apple products, as well as the appropriate language or framework for iOS development.

Which are the Programming Language for Developing an iOS App? 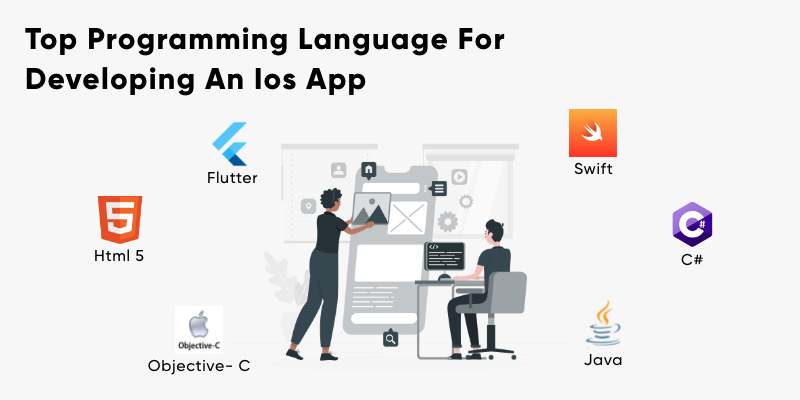 It Was Considered Infeasible for Commercial Use During the Early Stages of React Native’s Development. It was still unable to develop native mobile applications. Nonetheless, React-native has gradually grown in popularity, gaining community support and market share. You can use React Native to create high-quality mobile apps. Facebook released React Native, a cross-platform framework, in 2015. It is now one of the most widely used cross-platform applications. It creates native applications using JavaScript, allowing software developers to construct mobile apps utilizing website technologies.

Flutter is an app Software Development Kit (SDK) that comes with ready-to-use widgets and features. Google built it in 2015, and it was formally launched in 2017.

This tool makes it simple for Flutter developers to create aesthetically appealing, natively compiled mobile, web, and desktop apps with only one codebase.

Swift is a programming language used to create apps for macOS, iOS, iPadOS, watchOS, and tvOS. It was built by Apple in 2014 to replace Objective-C. Swift is designed to operate with frameworks like Cocoa and Cocoa Touch, as well as the huge Objective-C codebase for Apple products.

Swift is the 17th most popular programming language in the world, according to the Stack Overflow 2020 Developer Survey, with 5.9% of developers using it.

One of the most versatile and open-source programming languages for developing iOS mobile apps, as well as the most user-friendly for beginners and intermediate developers. It uses an extended version of C called Objective-c for Apple for the development of ISO apps.

C# is a high-level, object-oriented, general-purpose programming language that is mostly used in the development of Microsoft applications. It is the world’s seventh most popular programming language, and it gives programmers a great learning experience.

In terms of readability, coating, execution time, code maintenance, and so forth, there is always a comparison between Swift and Objective-C.

This language is mostly used for structure and body development for any type of work, whereas CSS is used for design. Moreover, HTML 5 is used for the development of the body structure in iOS app development. As a matter of fact, HTML 5 is the latest version of HTML technology, which is used to create and present web pages that define their own meaning and structure.

Interestingly, HTML5 knowledge can also be used to develop iOS apps using tools like Apache Cordova or the aforementioned Visual Studio for Mac.

How much does it cost to build an iOS app?

The cost of an app will also depend on who is developing your app. If you decide to take on the project yourself for a simple app, you might be able to get away with using a drag and drop app builder and a $5,000 budget. If you need a more robust app and want to hire a top firm it can cost up to $500,000+. However, most mobile apps generally fall between $100,000 and $300,000

How do I find the best iOS mobile app development company?

iOS developers specialize in building apps for Apple products. Pick the firms that can offer services throughout the app development process including app design, building, testing, and the eventual launch

Can you make iOS apps on Windows?

No, you cannot build iOS apps on Windows because Xcode, the IDE used for designing, developing, and deploying iOS apps, only runs on macOS. However, you can still deploy, run and test your iOS application directly from Windows using Microsoft’s app builder Xamarin

Choosing the appropriate programming language for iOS is a key decision that can have a significant impact on the success of your project. As a result, you should clarify your requirements and expectations before deciding on the ideal solution for you.

Looking for the appropriate technologies for your iOS application as well as competent mobile developers who can deliver on their promises?

Please get in touch with us. Mobile consultants and mobile developers specializing in various technologies can be found at Echo Innovate IT. We are the leading mobile app development company with over a decade of experience. To determine the best solution for you, schedule an appointment with us.

You Must Also Read

How To Build Pet Care App

The Technology Evolution In Real Estate Industry In Dubai

How To Build A News Application?

How to Build a Mobile App?