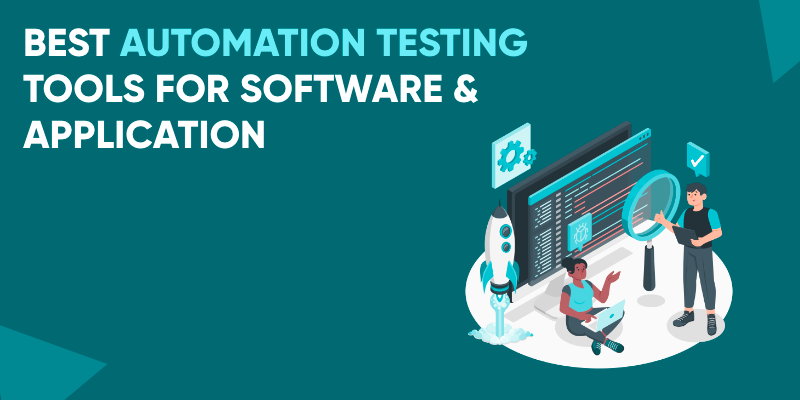 In this article, we’ve compiled a comprehensive list of automation testing tools for your convenience. You can explore each option and determine which is best for your project.

Running software programs that automatically execute test cases and create test results without the need for human intervention is known as automation testing.

It’s an improvement above manual testing. It saves a lot of energy and resources while leaving little or no opportunity for error. You can run these tests as many times as you need to analyze the same application once they’re ready, cutting down on manual testing time.

Because of the growing necessity and desire for automation in IT, a variety of top automation testing technologies are now available.

In the list below, we’ve included both commercial and open-source test automation options. Almost all licensed products, on the other hand, include a free trial version that allows you to check out the tools before deciding which one is best for you.

So, let’s start with the best automation tools available to help you with your testing!

What Are Automation Testing Tools?

The software that allows you to construct testing activities and then automate the testing process is known as automated testing tools. This would happen in a perfect world with very little human influence.

Automation testing methods are available for smartphones, mobile devices, and desktop computers, among other platforms. Testing automation enables performance testing to take place without the need for human intervention, allowing code to be tested 24 hours a day if necessary and speeding up the test execution process.

Automation testing solutions, on the other hand, are capable of much more and provide benefits such as increased test coverage, faster time to market, uniformity in software testing, and so on.

Now, let’s look at why it’s important to choose the correct automated testing tools and how to do it.

Why And How to Choose The Right Automation Testing Tools?

There are currently a plethora of automation testing tools available, and new ones appear every year. Some are open-source and free, while others demand a fee based on the functionality they provide.

Some of these automation tools have been around for a long time, while others are brand new and untrustworthy. Each of these tools, however, is unique and has its own set of characteristics.

And, with so many test automation tools to pick from, it’s difficult to choose the right one for your project, and testers frequently end up with tools that don’t satisfy project requirements. As a result, choosing the appropriate automated testing tools for your project is crucial.

Here are some simple tips for determining which tool is best for your project:

Katalon Studio is a low-code and scalable web, API, desktop (Windows), and mobile application automation testing tool. The Katalon community has now surpassed 1 million users, and it is the trusted automation solution of over 100,000 enterprises.

Users can simply download the tool and focus only on testing now that the prerequisites of coding and establishing a test automation framework have been removed. Studio also releases frequently to keep up with the latest platforms, browsers, and operating systems.

This framework, which was released in 2004, is one of the most popular open-source frameworks for web testing automation, if not the most popular. Selenium WebDriver, Selenium Grid, and Selenium IDE are part of its product suite.

This helps in automating Functional UI testing for desktop, mobile, and online applications. TestComplete can handle and identify dynamic UI elements in most available technologies, thanks to built-in support for 500+ controls and third-party frameworks.

First, it is a developer-centric automation solution for end-to-end web testing that only supports JavaScript frameworks. Second, it is built on a unique architecture that allows it to run in the same run-loop as your application, allowing native access to elements and speedier execution.

Price: Free or from $75/month for Dashboard Service

Ranorex Studio, which comes next on the list, can automate GUI testing for online, mobile, and desktop apps. Ranorex’s framework, which comes with both low-code automation and a full IDE, is simple to use for beginners and productive for experienced testers.

This is a web and mobile application testing tool that is cloud-based and automated. Moreover, it makes continuous testing easier for DevOps teams with automated cross-environment executions, custom features, test analysis, and broad integrations.

One of the most extensively utilized API automation testing tools is Postman. It enables users to write several types of tests, ranging from functional to integration to regression, and have them run automatically in CI/CD pipelines via the command line.

Price: Free or from $12/user/month

Price: Free or from $749/year for ReadyAPI

Eggplant Functional is a GUI automation testing tool for mobile, desktop, and web apps that is part of the Eggplant ecosystem. It is possible to automate different combinations of platforms and technologies using an image-based method.

Tricentis Tosca is an online, API, mobile, and desktop testing automation tool by Tricentis. It uses a novel model-based testing technique that allows users to scan an application’s user interface or APIs to produce a business-friendly model for test design and management.

This open-source tool is mostly for web applications and is meant for automated performance testing. It can encourage a large number of users to utilize online services and analyze the performance of the AUT. Jmeter can be useful to evaluate functional APIs as well.

Robot Framework is a general-purpose open-source framework for test automation, with a focus on acceptance testing and test-driven development. It’s low-code to begin with and expandable with a vast ecosystem of tools and libraries thanks to its keyword-driven methodology.

This open-source framework primarily targets Angular and AngularJS applications and automates end-to-end testing. WebDriver, Jasmine, NodeJS, and other technologies integrators. Protractors, on the other hand, may be useful to test non-Angular apps for regression.

We’ve compiled a list of 15 of the top Automation Testing Tools for various types of testing in this article. Some of these tools are free to use, while others require a license.

Yes, the tool you choose will always be influenced by your demands, but we hope that the list of test automation tools below will help you make your decision.

The importance of automation testing tools does not need to be emphasized again. To find the greatest fit, consider your team’s specialized demands, people resources, and future scalability.

Ready-made frameworks like Katalon Studio, on the other hand, can be a wonderful choice if your team is largely manual testers and you need a low-code solution to start with that can also grow with the team’s future scalability.

It is simple to create, execute, and maintain tests, as well as obtain centralized analytics of test outcomes.

NodeJs vs Golang: Which Is Best for Your Project? 2022

How Augmented Reality (AR)in Education is Shaping the Future of Learning?