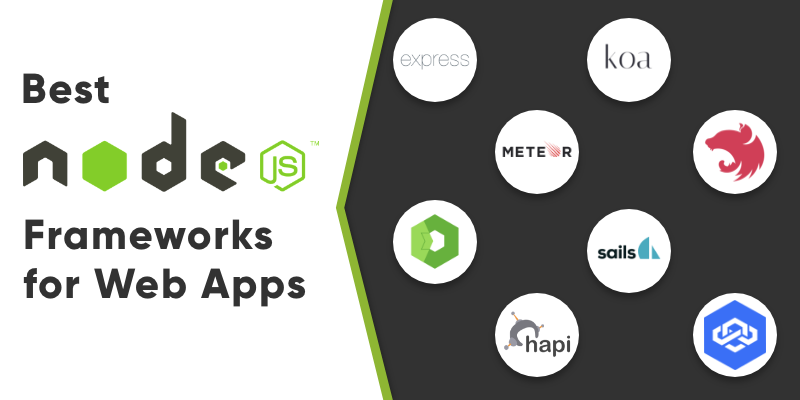 With each passing year, numerous technologies, tools, and frameworks emerge and quickly vanish from the industry. In the world of app development, the only consistent thing is change. As matter of fact, everyone is looking forward to the new trends and technologies that will reach the market in the coming year, empowering developers to create great web apps. Best Nodejs frameworks are difficult to find.

Although this may be true, the COVID-19 pandemic has expanded the e-commerce industry like never before, inspiring businesses from all over the world to adapt their traditional business methods to virtual markets. On the other hand, businesses are in a dilemma about which technology to use to develop an application that provides an exceptional user experience in order to survive in the market for the next few decades.

As a result of the increased demand, mobile app development companies are continuing to test various technologies that will enable them to create a future-ready app and offer advanced web app development features.

Not to mention, for many tech experts, the simple answer is to use Node.js, a Javascript framework, to build web apps. Here is the information that such survey reports convey.

Additionally, it’s safe to assume that Node.js has drawn the attention of developers all across the world. Correspondingly, before we get into detail about what makes Node.js such an excellent framework for creating online apps, it’s important to have a basic understanding of the framework.

What is Nodejs Framework? Why is it used?

Node.js is an open-source JavaScript tool based on the JavaScript Engine in Google Chrome. By the same token, it’s used to build scalable network applications with a fast and efficient event-driven, non-blocking I/O architecture. On both the server as well as client sides, it allows developers to create code in a single language (JavaScript). Likewise, NPM-Node Package Manager is the sole manager of node.js, ensuring that development time is reduced and optimal results are achieved. This is hosted on the V8 JavaScript engine.

Of course, everyone knows that node.js is based on a single-threaded model, which means that the input and output follow the same path. Nonetheless, the Java Class Library is a collection (or library) of reusable pre-written code that may be used to develop programs, whereas the Java Virtual Machine runs Java programs on a computer. However, Node.js, being one of the most popular scripting languages, can help you with everything from basic code comprehension to client-side scripts, event loops, and other coding jobs.

What is Node.js used for?

Because of its single-threaded nature, Node.js is best-suited for non-blocking, event-driven servers. Conversely, it was created with real-time, push-based architectures in consideration and is utilized for traditional websites and back-end API applications.

Nevertheless, market statistics, and facts about Node.js, you can be sure that it is gaining traction as a web app development framework.

What makes Nodejs a good choice for web App Development?

Not to mention, Node.js frameworks have a variety to select from because it is a fast-growing programming language. In fact, frameworks can assist you in scaling, accelerating the development process, and improving app performance across several projects. With this intention, what distinguishes JavaScript’s framework -Node.js? 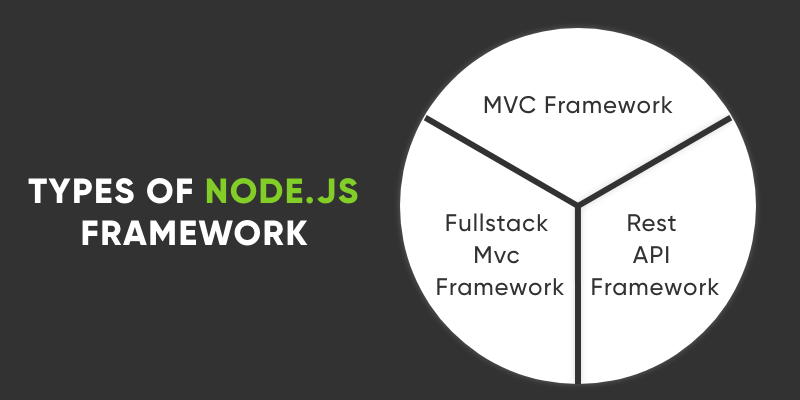 With this in mind, these nodejs frameworks are well-known for their excellent design patterns, which separate the entire application logic into three main components: models, views, and controllers. For example, Express.JS is the most widely used MVC framework among developers all around the world.

For developing real-time mobile applications, such frameworks include plenty of scaffolding, libraries, layout engines, and other useful development tools. Not only front-end but also back-end development are simply handled and supported by these nodejs frameworks.

As a matter of fact, the Nodejs frameworks are well-known for their remarkable ability to construct apps with pre-built REST API experiences. Of course, developers don’t have to bother about layouts because these frameworks provide a ready-to-use programming interface, which saves time and effort.

Uniquely, with the most GitHub ratings, Express is the most popular, quick, and MVC-based framework. Then it comes with a variety of libraries and components that work together with Nodejs frameworks to create stunning and powerful dynamic web apps.

In the first place, it is an MVC-based framework designed and developed by the Express team, Koa may be considered an extension of the Express framework. By the same token, the major goal of Koa is to provide a framework that is lighter than Express and capable of more quickly developing web apps and APIs.

Despite having fewer libraries and components than Express, Koa.js includes a lot of new functionality. Provided that Koa’s error handling capacity is significantly superior to that of the Express framework.

Meteor is a full-stack framework that allows you to build real-time web and mobile apps. Being that, it’s a cross-platform framework that works on iOS, Android, and the desktop. IN general, MeteorJS has the ability to integrate with other prominent technologies such as front-end frameworks and database systems such as React, Vue, Angular, and MongoDB, to name a few.

In fact, Meteor is more similar to the JavaScript syntax than other Nodejs frameworks, making it easier to grasp and learn for JS developers. To enumerate that is why many developers use Meteor.js for back-end development because it allows them to code for the entire website with just one programming language.

TypeScript, not JavaScript, is the primary programming language used by Nest.js. To clarify, it is a Node.js Rest API framework for creating scalable and efficient server-side applications. In general, TypeScript, its native language, gives it powerful features including object-oriented programming, functional programming, and functional reactive programming. To emphasize, Nest.js also has a command-line interface (CLI) that developers can use to link it with other frontend tools.

It’s an MVC-based framework for building web apps, real-time applications, and REST APIs. Total.js was released in 2013 with the primary goal of creating a framework that is complicated, stable, and free of dependencies. It includes a number of libraries, packages, and other components developed entirely in Total.js.

The Express framework is comparable to SailsJS. Despite this, several developers, including Sails, claim that it is better than Express. This is primarily due to the fact that it includes numerous features that Express does not. If we compare Sails.js vs ExpressJS using features as the key criterion, the former offers more promise.

Sails is a Node.js framework that is lighter and faster than Express. It’s also one of the greatest Node.js frameworks because of its integration with a variety of popular backend and frontend technologies. It has an ORM feature that allows it to work with any database system, including MySQL, MongoDB, PostgreSQL, Redis, and local disc.

Hapi is a strong and reliable Node.js framework created by Eran Hammer at Walmart in 2011. We can create sophisticated APIs and server-side scripting apps with hapi. It is also known as the server framework, and it enables the moving of data between the server and the client through APIs. Express is comparable to Hapi, however, it has fewer functions. Some developers even recommend hapi as a good alternative to Express, however, it lacks a large community.

LoopBack framework is an open-source for building dynamic and sophisticated REST APIs. It also comes with a simple command-line interface that makes it easy to combine with other front-end technologies. It allows interaction with several databases, including relational and NoSQL database management systems such as MySQL, Oracle, MongoDB, and PostgreSQL, because it can be used to construct REST APIs.

By all means, Derby is a Node.js framework that can be used to create web-based apps. It’s a great framework for creating both desktop and mobile web apps. Although it has a tiny community at the moment, the Node.js framework has a huge amount of potential. Data synchronization, real-time concurrency, API, and the ability to construct dynamic web pages are just a few of the capabilities it offers.

Indeed, Mean.js is a full-stack MVC-based Node.js framework designed to give cloud-native full-stack JavaScript applications an easy and enjoyable starting point. Certainly, MongoDB, Angular 6, Express, and Node are the acronyms for Mean. Moreover, today’s popular technology includes all of these tools.

According to research done by Echo Innovate IT which is considered the top Web and mobile app development Granted, the following framework you can take into consideration out of the above mentioned:

What language is node.js written in?

Node.js is written in C, C++, and JavaScript.

Node.js is a free and open-source framework that uses JavaScript on the server to build fast, lightweight and scalable web applications. Thus, it can run on various operating systems’ platforms, including Mac OS X, Unix, Linux, Windows, etc.

Is node.js a programming language?

Node.js is not a programming language. Provided that, it’s a runtime environment that runs JavaScript outside the browser.

Although, each framework contains characteristics that distinguish it from the others. Thus, you can use any of these frameworks to improve your JavaScript skills and build dynamic web applications using back-end technologies. However, that the Node.js framework you chose matches your project’s requirements.

Notably, we hope that this article has helped you find an appropriate framework for your project. Still confused?

With this in mind, you can get in touch with the mobile app development company and get your doubts cleared.

Echo innovate IT is the best web and mobile app development company with over a decade of experience. Contact our experts now!

What Is A Mobile Application?