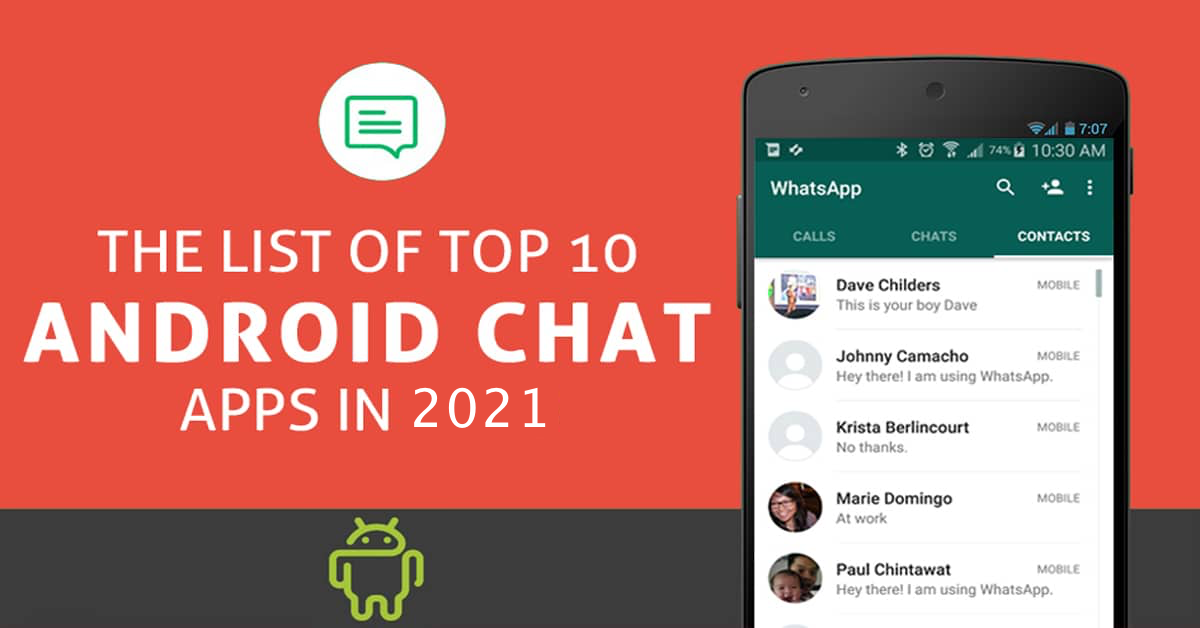 It’s not all about WhatsApp, you know, there are tons of android chat apps out there.

Here’s a quick run of the best, Android has to offer. So you can choose the one that best suits your individual tastes and needs. We love to do group chats, group videos, and free calls with our friends and family.

Below are the android chat apps which help us to be in touch with our contact list(phone numbers).

Our smartphones allow constant and immediate communication with our family, friends, and even co-workers, but integrated box options are not always the best.

Messaging applications have grown to provide rich services to offer all kinds of interactions with others, free text messages to voice and video calls, photo and file sharing with the added benefit of encryption.

We’ve tried a lot of different options, so here are some of the best messaging applications is both Android.

It is a 2008’s app and the best among the android chat apps. The company renewed its messaging service in 2010.

Through the years, Facebook has launched a new applications in a variety of different operating systems 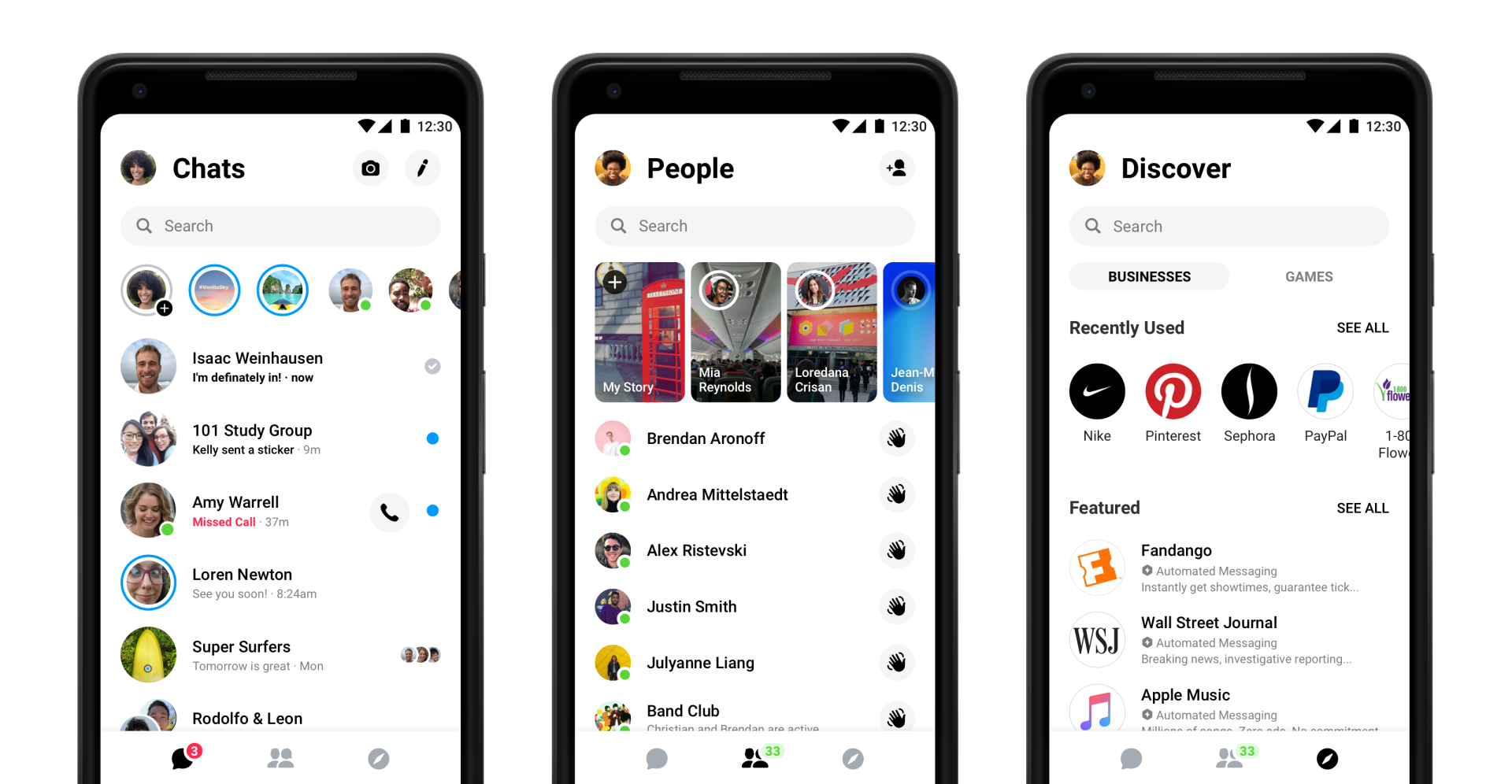 They launched a website-specific interface (Messenger.com) and messaging functionality from the main Facebook app, which allows users to use a split web interface or download a standalone application.

Users can send messages and share photos, videos, stickers, and audio files as well as react to messages from other users and interact with robots.

The service also supports voice and video calls. Standalone applications support the use of multiple accounts, conversations with optional encryption end to end, and playing games.

Skype is a telecommunications and a reliable one among all the android chat apps that specializes in providing video chat and voice calls between computers, tablets, mobile devices, the Xbox, and smartwatches over the Internet.

It allows users to communicate over the Internet by voice using a microphone, a webcam video, and instant messaging. 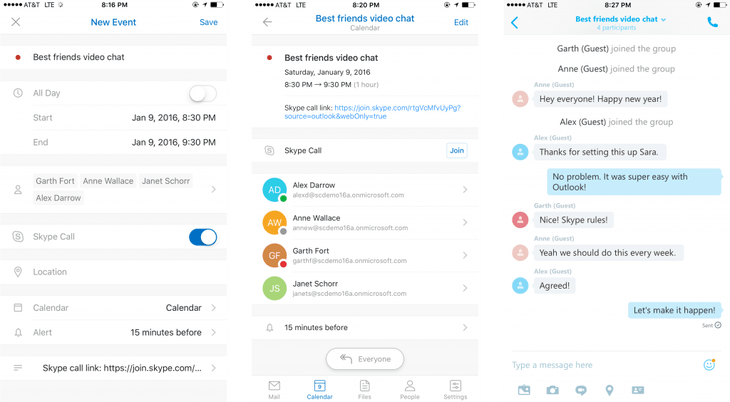 It also implements a freemium business model. Skype to Skype calls are free, while calls to landline and mobile phones (via traditional telephone networks) are loaded through a system of user accounts based on credit debit called Skype.

It is interesting to note that some network administrators have banned Skype on corporate, government, home, and education networks, citing reasons such as inappropriate use of resources, use of excessive bandwidth, and security issues.

Telegram is an instant messaging and cloud-based voice-over IP. A very popular and easy to use of all the android chat apps. The client applications are available for Android, iOS, Windows Phone, Windows NT, macOS, and Linux.

Users can send messages and share photos, videos, stickers, and audio files of any type.

The telegram client code is open-source software. The service also provides APIs for independent developers. In March 2018, there were 200 million telegram users.

The service provides encryption end to end for voice calls. It also provides end-to-end encrypted optional chats “secret” between two users, but not for groups or channels.

Speed and security are the names of the game for Telegram.
The app provides encrypted cross-platform messaging and it’s completely free.

GroupMe is a mobile group messaging app owned by Microsoft. It was released in May 2010 by the private company GroupMe.

In August 2011, GroupMe delivered more than 100 million messages each month and in June 2012, that number rose to 550 million dollars. In 2013, GroupMe had more than 12 million registered users. 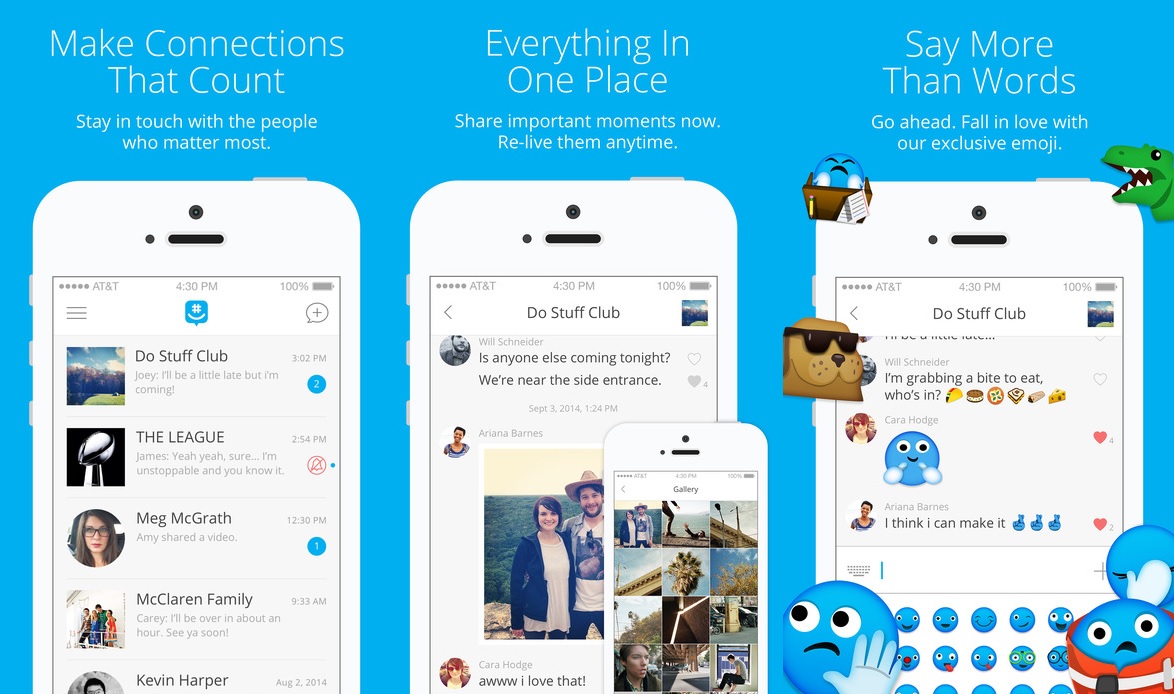 The service then synchronizes with contacts and from that point forward the user can make groups limited to the size 500.

An individual who is part of an active group has the ability to turn off notifications for the application users still receive the message, but will not be notified of it.

Each group is given a label and assigned a unique number. Some of the features of the application include the ability to share photos, videos, locations, create events, and custom emoji.

Tango is a third-party android chat app software. It has multiplatform message services for smartphones developed by TangoME, Inc. in 2009.

The application is free and in addition to video calls, also offers voice calls, text messages, share photos, and games.

In March 2014, Tango had over 200 million registered users. Tango is available in 14 languages including Arabic, Chinese and Turkish. 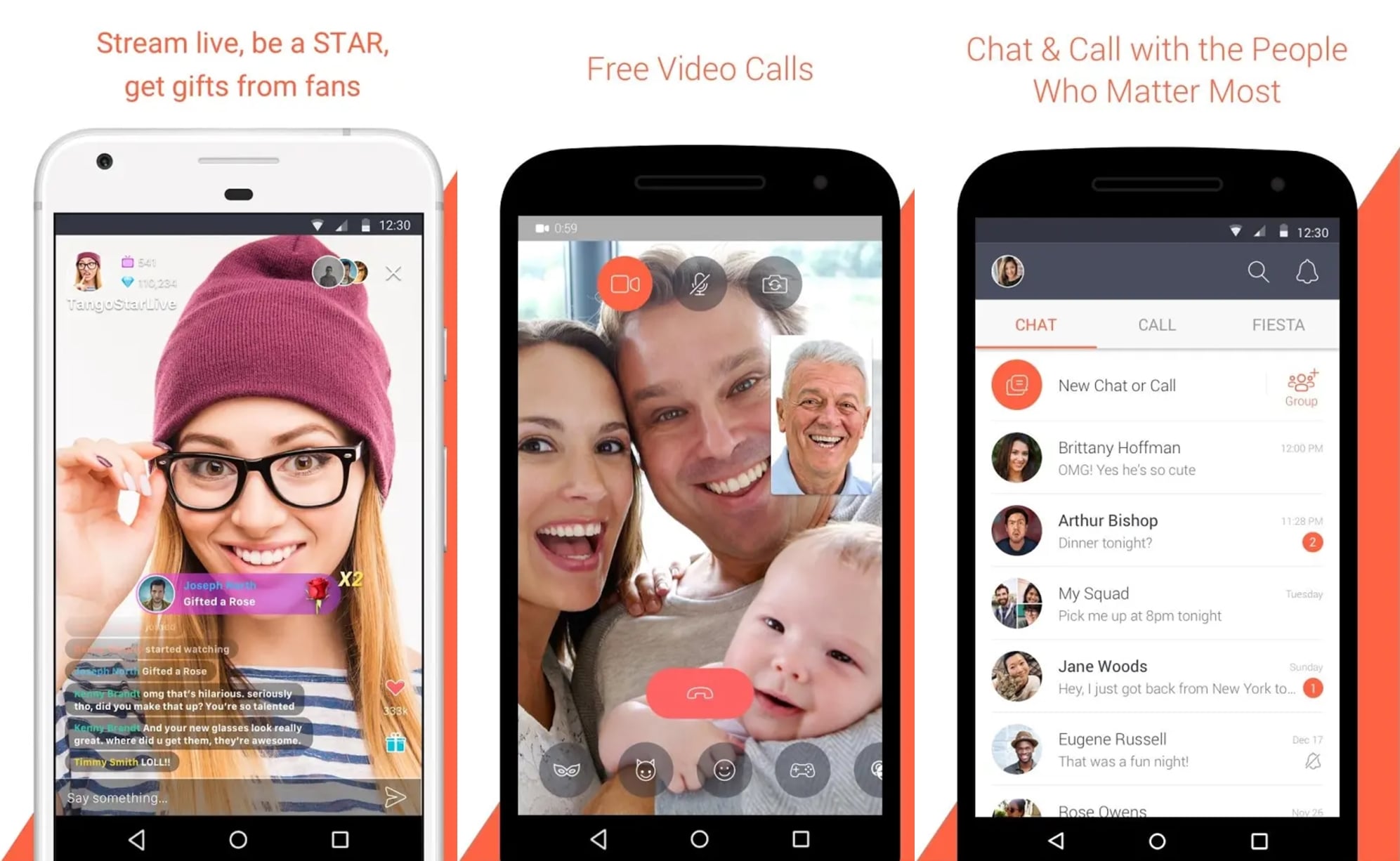 Tango will automatically find your friends based on your contact list, but they must be using the service to show up (or you can invite them).

Additionally, Tango can be used to place calls, find like-minded friends or people in the vicinity using the service, which adds a bit more social networking to the mix than some other providers.

Google Hangouts is a communications software product by Google.

Originally a feature of Google+, Hangouts became an independent product in 2013, when Google also began integrating features of Google+ Messenger and Google Talk to Hangouts.

Hangouts are going to be “the future” speech. Google will close the classic version of Hangouts in October 2019. 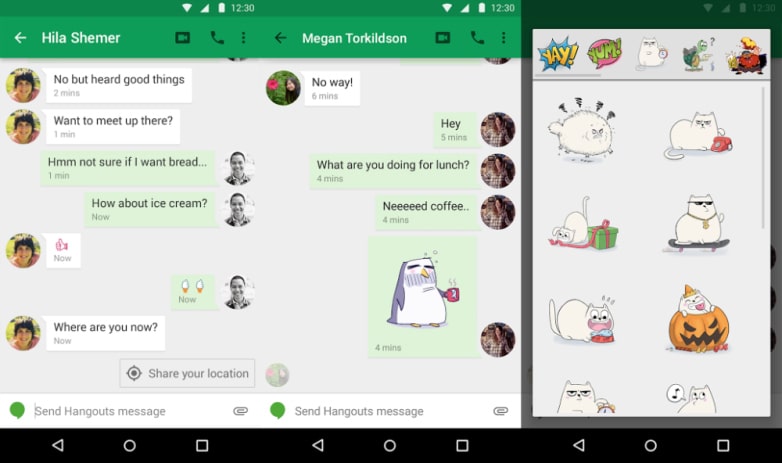 Hangouts allow conversations between two or more users. The service can be accessed online through websites Gmail or Google+, or via mobile applications for Android and iOS.

Chat histories are stored online, allowing them to synchronize between devices. Photos can be shared during the talks, which are automatically uploaded to a private album on Google+. Users can also now use emoji-colored symbols in their messages.

As with previous Google+ Hangouts, users can also perform a group video chat with up to 10 users simultaneously.

It is freeware for Android, iOS, Microsoft Windows, macOS, and Linux. Users register and are identified through a cell phone number, but the service is accessible on desktop platforms without mobile connectivity. 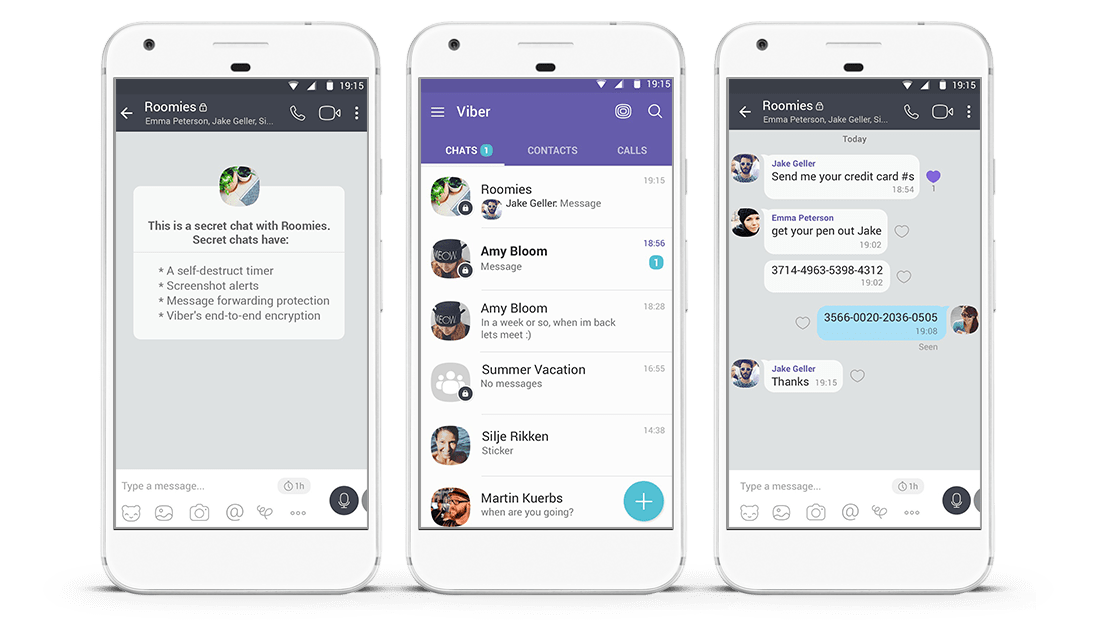 In addition to instant messaging it allows users to exchange media such as images and video records and also provides an international payment landline and mobile calling service called Viber out.

As of 2018, there are more than one million registered users on the network.

Line (LINE style) is a freeware application for instant communication in electronic devices such as smartphones, tablet computers, and personal computers.

The line is an application that runs on multiple platforms and is accessed across multiple personal computers (Windows or macOS). The application will also give you the option to sync the address book.

This application also has a function to add friends through the use of QR codes, line identification and waving phones simultaneously. 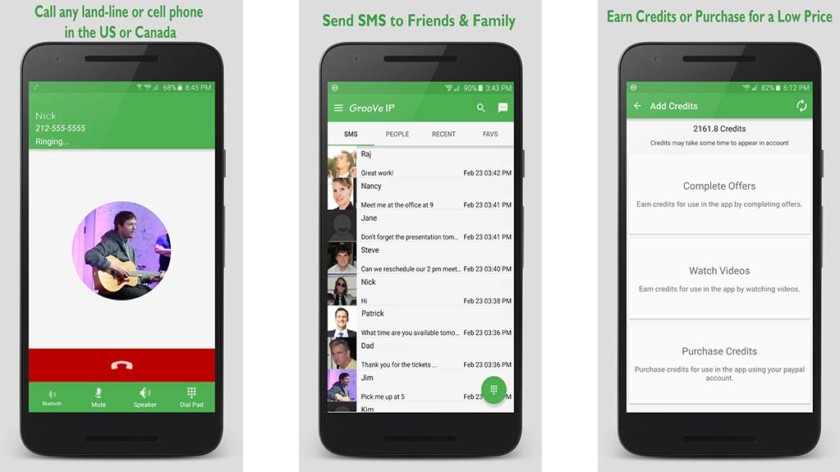 You can also share photos, videos, and music with other users, current posts or any specific location, audio voice, emoji, stickers, and smilies for friends.

Users can view a real-time confirmation when messages are sent and received or use a feature private chat, which can hide and delete a chat history (of both devices involved and servers line) after a time set by the user.

The application also makes voice calls and video free. Users can also chat and share media in a group by creating and joining groups of up to 500 people. Chats also provide bulletin boards where you can send, like, and comment.

BBM was formerly known as BlackBerry Messenger. It is an application of mobile instant messaging and video telephony property included on BlackBerry devices that allow messaging and voice calls between the BlackBerry operating system, BlackBerry 10, iOS, Android, and Windows users Mobile.

Editing consumers to BlackBerry OS and BlackBerry 10, as well as the issue of payment of the company, called BBM Company (formerly known as protected BBM), were fully developed by BlackBerry Limited. 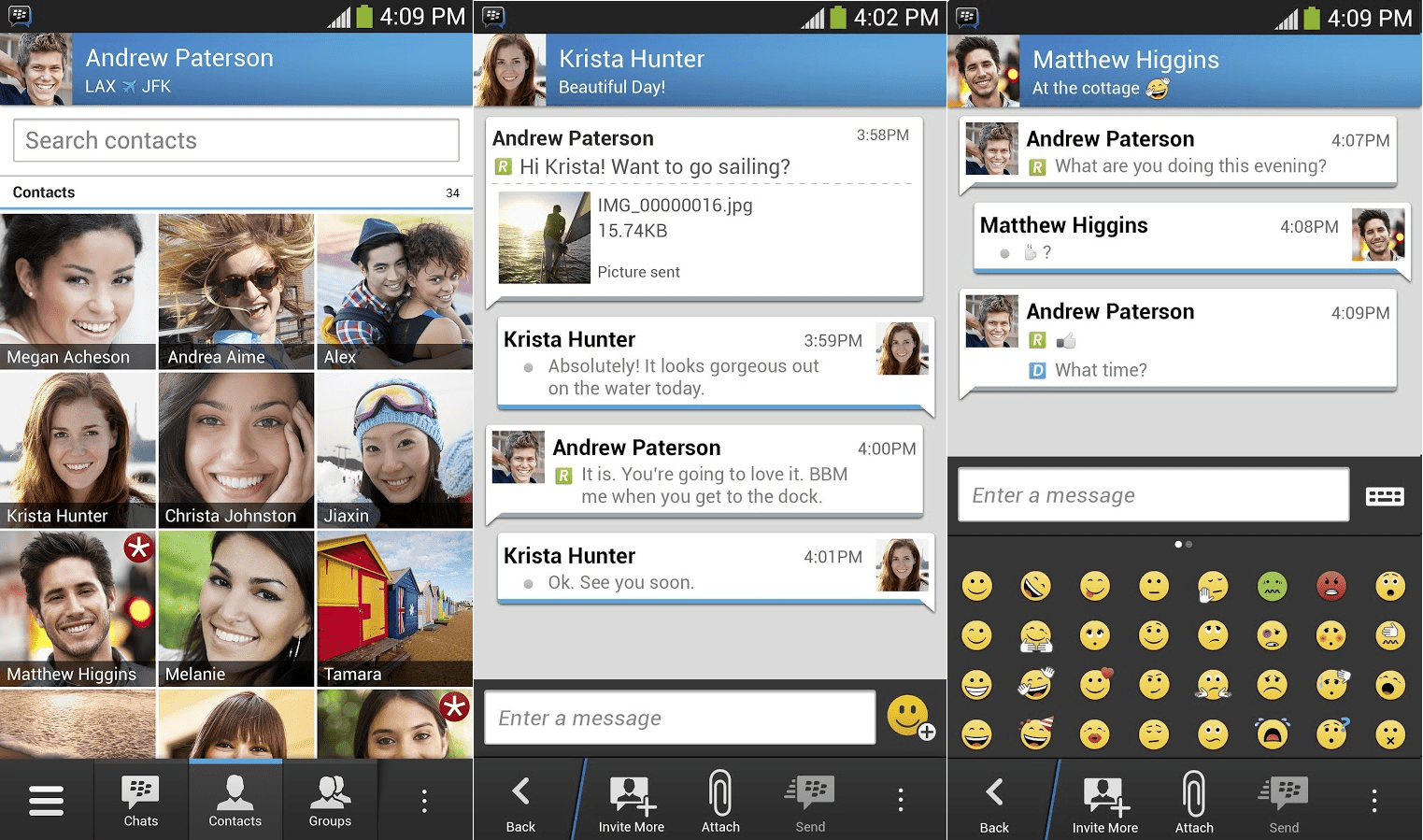 Exchange of messages in BBM takes place over the internet using the BlackBerry PIN system. In the past, many service providers authorized login to BBM using a BlackBerry data plan dedicated.

Message exchange was possible to a single person or through discussion groups or chat dedicated, allowing multiple BlackBerry devices to communicate in a single session.

In addition to offering instant text-based messages, BBM also allowed users to send images, VoiceNotes (audio) files (up to 16MB), share real-time location on a map, stickers, and a wide selection of emojis.

WhatsApp Messenger is a free, cross-platform messaging and voice-over IP (VoIP), owned by Facebook. It is today’s most popular android chat app.

It allows users to send text and voice messages, make voice and video calls, and share images, documents, user locations, and other media.

The service requires users to provide a number of standard cellular mobile phones to register for the service. 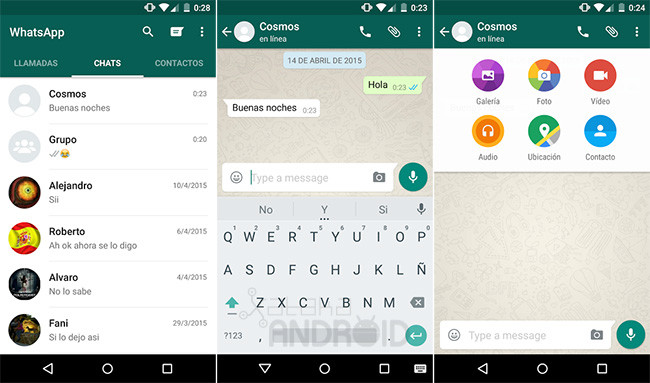 WhatsApp client application runs on mobile devices, but is also accessible from desktops, as long as the user’s mobile device stays connected to the Internet while using the desktop application.

The service requires users to provide a number of standard cellular mobile phones to register for the service.

How much time will it take to develop an Android Chat App like Whatsapp?

Android chat app like WhatsApp will usually take 4-6 months to successfully develop an app that is ready for public release. Time may vary depending on the complexity of your app and requirements.

How much does it cost to develop Android chatting apps?

if you want to develop an app like WhatsApp might cost you around $30,000-$40,000. Cost may vary as per your needs. You can also use an app cost calculator to estimate the exact cost. Contact us now.

We help our clients increase their productivity and manage their clients with our ingenious mobile app development. 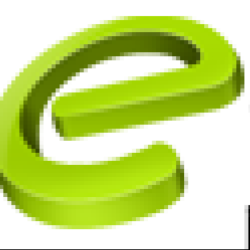 How To Consider Which Platform Will Be Best For My App Project?